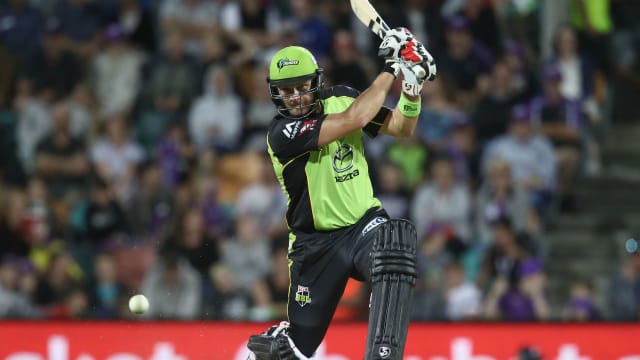 Former Australia all-rounder Shane Watson has announced his retirement from the Big Bash League after spending four seasons with the Sydney Thunder.

Watson was part of the Thunder side that clinched glory in the 2015-16 BBL and has captained the team for the past three years.

The 37-year-old called time on his Thunder career having scored a club-record 1,014 runs, which included a century against Brisbane Heat last season.

"I want to thank everyone from the bottom of my heart who has been involved with the Sydney Thunder over the last four seasons," Watson said in reports quoted on the team's official website.

"I will most definitely miss [the] support that the club gets from the Thunder Nation. Their unwavering support through the ups and downs inspires everyone and I will cherish that support deeply.

"Finally, to my team-mates, I have played with so many great people and cricketers at the club and I sincerely wish everyone the absolute best for the upcoming seasons."

Cricket Australia (CA) congratulated him on his career.

"Shane Watson was one of the most exciting short form players ever to grace a cricket field," CA chief executive Kevin Roberts said.

"Talented, skilful and powerful, Shane was a devastating batsman at his best.

"It was only a few months ago he scored a century from just 62 balls for the Thunder against the Brisbane Heat at the Gabba.

"In a career which spanned almost two decades Shane made a major contribution to Australian cricket firstly at international level and then in domestic cricket as a significant contributor to the Big Bash.

"His greatest quality was persistence, overcoming a number of sometimes serious injuries and curtailing his pace. He became a probing swing and seam bowler."