Liverpool acting like a club that belongs at the top – Henderson 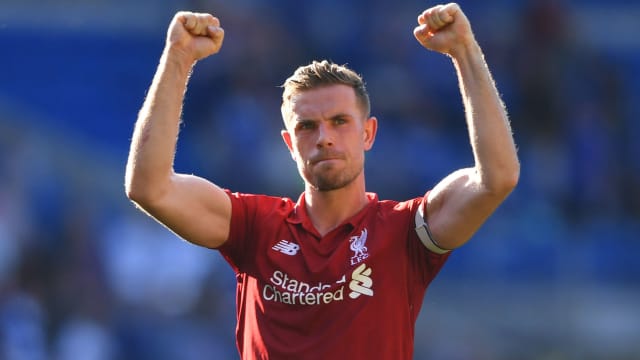 Liverpool's mentality this season is like that of a club that belongs at the top and challenging for major titles, according to captain Jordan Henderson.

Jurgen Klopp's men are enjoying one of their best campaigns in a generation, as they remain in the Premier League title race with three games to go and are in the Champions League semi-finals.

Even if the Reds do not end up topping the table, they will almost certainly break the record for most points won by a team finishing second in the Premier League, as they are just one away from equalling Manchester United's haul of 89 from 2011-12.

Manchester City are in the driving seat having beaten United 2-0 on Wednesday, but Liverpool look set to push them all the way.

Even if Liverpool finish as runners-up, Henderson thinks they have the focus and attitude to keep returning for title tussles.

"It feels like we've been talking about scenarios for the end of the season since August," Henderson wrote in the official match programme for Friday's visit of Huddersfield Town.

Four #LFC players have been named in the @PFA Premier League Team of the Year.

"I've honestly not known a season like it. Essentially, since the opening weeks of the campaign, there has been speculation and comment on what every result means for what can be achieved this season.

"We haven't lost an ounce of focus. Don't get me wrong; all of us are living and breathing every second of this.

"We absolutely love it and we are completely focused on it. We love the pressure, the intensity and the focus. This is what every single one of us wants every single season – to have these pressures at this point of the season.

"When I look around our dressing room I see a group of players who could be together for years and years, if we all want that. The best way of describing our current situation is that the overriding feeling is opportunity and that goes for everyone connected with the club – from the dressing room to the terraces.

"It's anticipation rather than desperation. We're acting like a club that 'belongs' at this level, but not in an arrogant way.

"I think that's been a key part of our growth as a club and it's why everyone should be relishing and embracing the pressure of the remaining weeks of the season."