Klopp: I haven't thought for one second about Barcelona 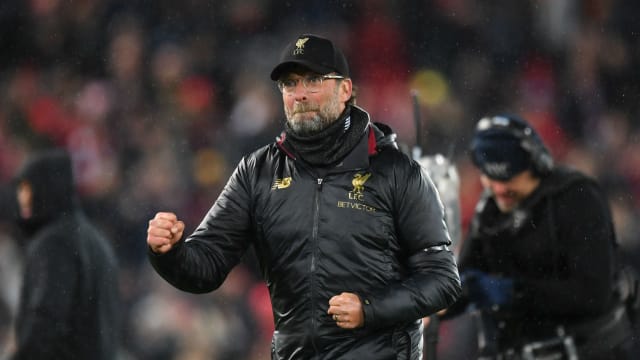 Jurgen Klopp revealed he is still yet to work out how Liverpool will set up against Barcelona in the first leg of their Champions League semi-final.

Liverpool ran riot against Huddersfield Town on Friday as they moved back to the top of the Premier League, Sadio Mane and Mohamed Salah netting doubles in a 5-0 win following Naby Keita's opener after 15 seconds.

Barca are next up at Camp Nou, yet Klopp refused to contemplate that tie against the Spanish giants while there were still domestic games to play beforehand.

"So many teams have tried to win there and didn't. It's not likely to happen for us, but it is possible. We will have a plan for sure, but not right at the moment."

The pressure is now back on Manchester City in the Premier League title race, with Pep Guardiola's side facing Burnley on Sunday.

Any slip-up would put Liverpool in the ascendency with two fixtures – against Newcastle United and Wolves – remaining, yet Klopp is not looking too far ahead.

50 - Liverpool have now earned 50 points at Anfield this season, their best ever tally at home in a Premier League season (previously 49 in 2013-14), with this the first top-flight season they have reached 50 points at home since 1987-88 (also 50). Bullseye. #LIVHUDpic.twitter.com/JCYKaruzeD

"I don't know if it will be Burnley, Leicester City or Brighton or any of them," Klopp said when asked if he thought City may drop points in the run-in.

"I don't even know what will happen at Newcastle, to be honest. If somebody should be champions they will be champions, if not then they will not.

"We have to do our job, win the games and see what happens. The talk is normal, but it doesn't really bother us, 91 points is just incredible.

"It's special so far, the boys have done everything they had to do to have a chance.

"All over it was brilliant, a really good performance, everything that we need was there. Really happy. A perfect day, nearly. We won this game in a really impressive manner."