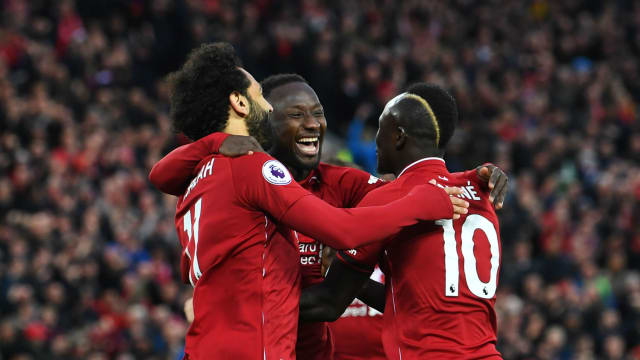 Naby Keita scored Liverpool's fastest ever Premier League goal as the Reds ripped through Huddersfield Town on Friday - with Mohamed Salah marking a personal milestone in style just before the break.

Just 15 seconds were on the clock when Keita doubled his tally of league goals for the campaign, slotting in off the post after robbing Jon Gorenc Stankovic of possession and exchanging passes with Salah.

It was Liverpool's fastest league strike in the competition, while also making Huddersfield the first Premier League side to score and concede a first-minute goal in the same season since Bournemouth in 2016-17.

Jurgen Klopp's side soon had another when Sadio Mane headed home Andrew Robertson's cross, the forward notching his 10th in his last nine games at Anfield.

15 - After just 15 seconds, Naby Keita's goal for Liverpool is the quickest they have ever scored in a Premier League match. Lightning. #LIVHUDpic.twitter.com/ADQcCylQMu

Liverpool's first-half rout was not finished there, though, as Salah celebrated his 100th game for the club with a deft chip over Jonas Lossl, putting the rampant hosts 3-0 up at the interval.

In the process, Salah became only the third Liverpool player to score 20 or more Premier League goals in consecutive seasons for the club, following in the footsteps of Robbie Fowler and Luis Suarez.