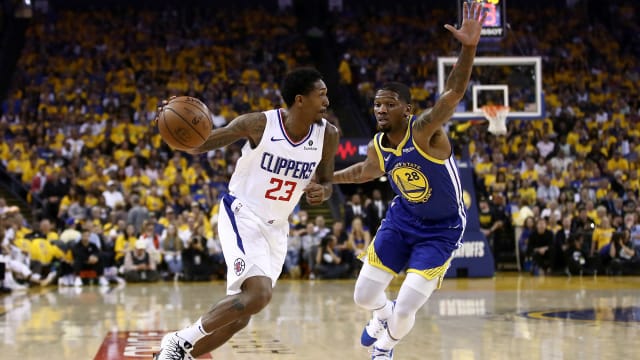 The Houston Rockets advanced to the Western Conference semi-finals after beating the Utah Jazz in the NBA on Wednesday.

The Rockets closed out their first-round series against the Jazz with a 100-93 victory in game five at the Toyota Center.

James Harden led Houston with 26 points and made a key defensive play down the stretch.

Royce O'Neale was an unlikely star for Utah, leading the team with 18 points.

James Harden swipes it away and makes both at the line! #RunAsOne 98 #TakeNote 93

The Rockets will face the winner of the Golden State Warriors-Los Angeles Clippers series next.

The Clippers got a second win in Oracle Arena on Wednesday.

Lou Williams proved how dominant he can be in the clutch, scoring 33 points on 12-of-19 shooting. He hit some important shots in the fourth to keep the Clippers in front.

Kevin Durant posted a game-high 45 points in the Warriors' loss.

Golden State will travel to Los Angeles for game six.

Clint Capela followed up a poor game four by posting 16 points and 10 rebounds on six-of-seven shooting for the Rockets.

Montrezl Harrell scored 24 points on 11-of-14 shooting for Los Angeles.

Capela overpowered Rudy Gobert in the paint and threw down a powerful two-handed slam.

Harrell soared over two Warriors to hammer a dunk home.

MONTREZL HARRELL WITH AUTHORITY ON THE SLAM!

Denver have a 3-2 lead over seventh-seeded San Antonio. Should the Nuggets lose, they will have home-court advantage for game seven. But they would likely rather avoid that against the Spurs' experienced players and coaching.