Pogba the surprise inclusion in Man City, Liverpool-dominated PFA Team of the Year 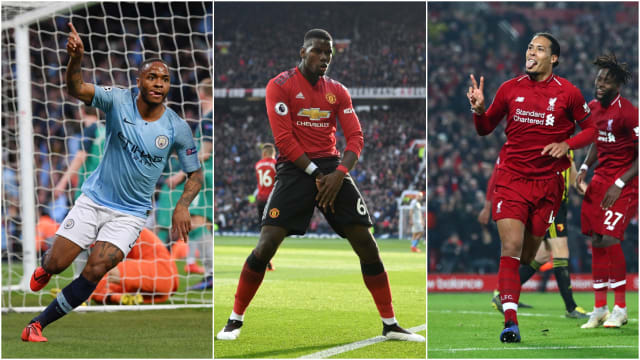 Liverpool and Manchester City dominate the Professional Footballers' Association's (PFA) Premier League Team of the Year, while there is a surprise inclusion for Manchester United's Paul Pogba.

City and Liverpool have been streets ahead of the rest in the Premier League this season and are in a two-way tussle for the title with three games to go.

As such, 10 spots in the PFA's Team of the Year are taken up by City and Liverpool players, making it the first time in the history of the combined XI that only three teams have been represented.

Raheem Sterling and Virgil van Dijk – the two favourites for the individual prize – are present, with the former joined by team-mate Sergio Aguero and the Reds' Sadio Mane in attack.

Sterling is enjoying another marvellous season having scored 17 times and set up another 10, while Van Dijk has helped transform Liverpool into title challengers.

Ederson ends David de Gea's four-year streak as the most-backed goalkeeper, while compatriot Fernandinho is in alongside Pogba, making it the first time two Brazilians have made it into the team in the same season.

Bernardo Silva and Aymeric Laporte complete the City contingent, while Trent Alexander-Arnold and Andy Robertson – the first Scottish player to be included since Darren Fletcher in 2009-10 – slot into a Liverpool-heavy back four.

The most notable inclusion is surely that of United's Pogba, however, with the Frenchman a regular target of criticism for a lack of consistency, particularly during the first half of the campaign under Jose Mourinho.

He soon stepped his game up under Ole Gunnar Solskjaer and has 13goals and nineassists in 33 games, but a haul of sevenpenalties impacts his record significantly and he has been lambasted over recent weeks for a series of underwhelming performances.

PFA Premier League Team of the Year in full: