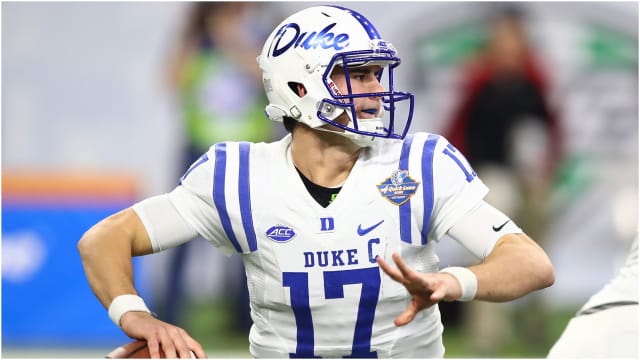 The New York Giants have selected their successor for Eli Manning, taking Daniel Jones with the sixth overall pick in the NFL Draft.

Giants general manager David Gettleman has been steadfast in his support of Manning despite consistently disappointing performances for New York.

Yet the two-time Super Bowl champion quarterback's era with the Giants appears to be nearing its conclusion after the Giants made Jones their future.

After Kyler Murray went first overall to the Arizona Cardinals, many expected Ohio State's Dwayne Haskins to be the next quarterback taken.

Instead the Giants went with Duke signal-caller Jones, who played for Manning's college coach - David Cutcliffe - during his time with the Blue Devils.

"I'm thrilled to be part of the Giants, I'm looking forward to getting started," Jones said on the podium.

Jones is already familiar with Eli and elder brother Peyton having attended their passing academy.

"Those are two special guys," he added. "I look forward to learning from Eli up there."