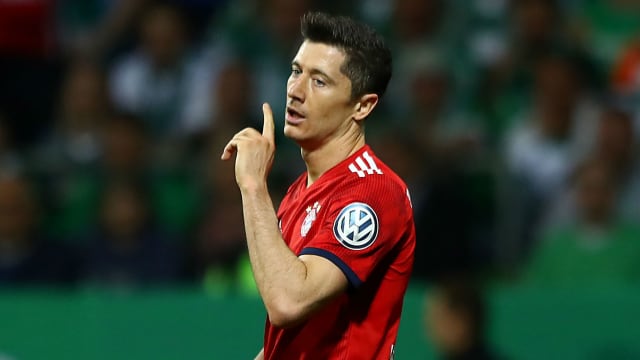 Robert Lewandowski scored twice as Bayern Munich booked a place in the DFB-Pokal final with a 3-2 win at Werder Bremen, surviving a stirring second-half fightback.

Lewandowski's first-half goal put Bayern on track and when Thomas Muller added their second after the interval at Weser-Stadion on Wednesday they seemed set to cruise into a final against RB Leipzig in Berlin.

But Werder hit back with Yuya Osako and Milot Rashica on target with a quickfire double to briefly draw them level before Lewandowski converted a controversial penalty in the 80th minute to win it.

Bundesliga leaders Bayern suffered a shock loss to Niko Kovac's Eintracht Frankfurt in the final last year but, despite Lewandowski missing an open goal for his hat-trick in added time, the coach now has a chance to potentially make it a double in his first season in charge of the Bavarian giants.