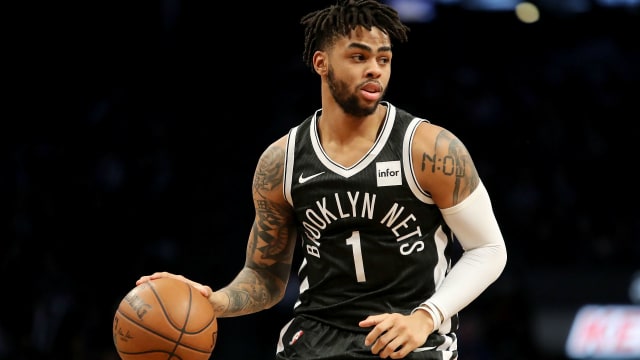 D'Angelo Russell does not want to leave the Brooklyn Nets.

The 23-year-old guard developed into an All-Star this season for the Nets and led the franchise to their first playoff appearance since 2014-15.

Russell will be a restricted free agent this offseason.

"I definitely want to be here," Russell said on Wednesday, via the New York Daily News.

"But I also know it's a business, too. I'm not going to play that role like I don't know what could possibly happen. Say somebody comes here that I have to be a part of [a transaction to acquire them], I know that could be a possibility.

"So, I just want to stay in this moment and not speak too soon about anything."

Russell was originally selected by the Lakers with the second pick in 2015. He spent two seasons in Los Angeles before he was traded to Brooklyn in June 2017.

"I set so many goals going into this season," Russell said. "I wanted to be an All Star, I wanted to make the playoffs, I wanted to stay healthy and play 80-plus games… I just wanted to be healthy. I know if I'm healthy that will take care of a lot things. So, my prayers, all that stuff, were answered, I couldn't be more proud of the way we handled it this year."

Russell said he has a strong relationship with Nets coach Kenny Atkinson.

"I take pride in creating genuine relationships with people that genuinely care about you," Russell said. "And coach [Atkinson] is one of the most genuine, emotional, man he's a great dude. And I thank him as much as I can just for giving me the opportunity to come over here and be me and learn how to be a better me at the same time. And he gave me the guidance."

The Nets were eliminated from the playoffs in the opening round by the Philadelphia 76ers in five games.