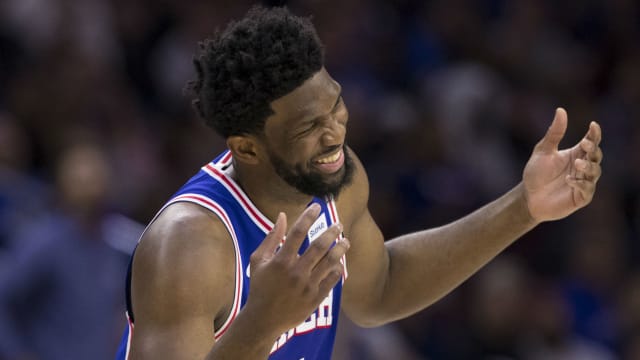 The Toronto Raptors and Philadelphia 76ers set up an Eastern Conference semi-final showdown, while the Denver Nuggets moved ahead of the San Antonio Spurs.

Kawhi Leonard posted 27 points as the Raptors topped the Orlando Magic 115-96 in Game 5 on Tuesday.

The Raptors sealed a 4-1 series victory, with the 76ers next up in the second round in the east.

Philadelphia blew away the Brooklyn Nets 122-100 after a dominant first quarter at home.

Denver became the first team in the Western Conference series to win two straight games and did so in a dominant fashion.

Jamal Murray finished with a game-high 23 points on nine-of-16 shooting, while LaMarcus Aldridge and DeMar DeRozan both contributed 17 points for Spurs.

Portland Trail Blazers star Lillard scored a franchise-record 34 first-half points and finished with 50 to secure a dramatic 118-115 win over the Oklahoma City Thunder and a 4-1 series success. Lillard made a ridiculous buzzer-beating three-pointer over Paul George for the victory.

George scored 36 points and helped pull the Thunder back from a 12-point deficit, but the Trail Blazers' made all the right plays down the stretch to reclaim the lead.

Nikola Jokic had a quality night all around, racking up 16 points, 11 rebounds and eight assists for the Nuggets.

No magic for Isaac or Orlando

D'Angelo Russell had eight points on three-of-16 shooting for the Nets.

Ben Simmons ended Philadelphia's first quarter with a slam at the rim.

Ending the first with a BANG

Marc Gasol with the big block of D.J. Augustin's floater, which helped the Raptors get out on the break.

The Houston Rockets missed an opportunity to sweep the Utah Jazz on Monday. But now, they will get a chance to finish things off at the Toyota Center. Should the Rockets and Golden State Warriors win on Wednesday, the much-anticipated matchup between the two could get underway soon.