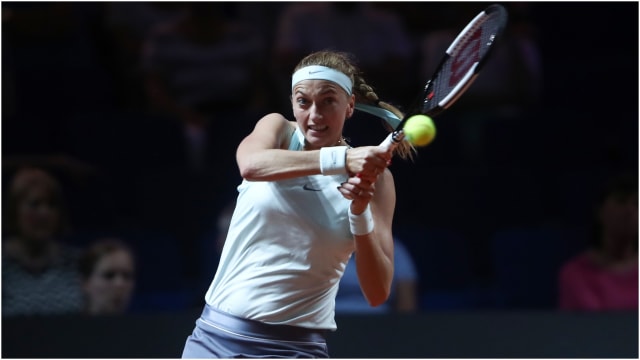 Petra Kvitova's bid to become world number one at the Stuttgart Open began seamlessly with a 6-1 6-4 defeat of Greet Minnen.

With Simona Halep absent through injury, Kvitova has the opportunity to capitalise and climb the rankings if current leader Naomi Osaka falls early in Germany.

Kvitova did her part in the second round after a first-round bye, sweeping past Minnen despite a wobble in the middle of the second set.

It was plain sailing early on and looked to be going that way again in the second when the third seed broke for a 3-2 lead, only to immediately cede her advantage.

That was merely a temporary setback and Kvitova marches on, while Osaka will begin her campaign in the second round on Thursday against Hsieh Su-wei, who saw off Wang Qiang 4-6 6-3 6-4 on Court 1.

Anett Kontaveit - the only seed other than Kvitova in action on Wednesday - proved too strong for Caroline Garcia, beating the French star 6-4 6-3.

Belinda Bencic and Donna Vekic each also won in straight sets, as did Victoria Azarenka against Vera Zvonareva, setting up a meeting with defending champion Karolina Pliskova.

Anastasia Pavlyuchenkova recovered from a set down to defeat Julia Goerges, who retired at 4-0 down in the decider. The German explained she was suffering from numbness in her fingers related to an inflamed vertebrae.

At the Istanbul Cup, the seeds had a tough time as three bowed out on Wednesday, having seen Carla Suarez Navarro notably depart the previous day.

Mihaela Buzarnescu dominated her first set against Margarita Gasparyan but then lost 1-6 6-4 7-5.

Meanwhile, Dayana Yastremska and Ajla Tomljanovic were each toppled in straight sets - by Kristina Mladenovic and Marketa Vondrousova respectively.