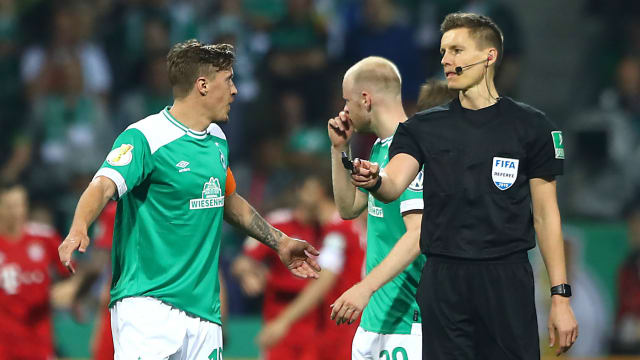 Quickfire goals from Yuya Osako and Milot Rashica had drawn Werder level on Wednesday after Robert Lewandowski and Thomas Muller scored to put Bayern in control.

But with 10 minutes to go at Weser-Stadion, Theodor Gebre Selassie's challenge on Kingsley Coman resulted in referee Daniel Siebert pointing to the penalty spot, with VAR not used.

Lewandowski stepped up to convert and in the 91st minute ex-Bayern striker Claudio Pizarro missed a good headed chance at the back post to force extra time.

The full-time whistle saw numerous Werder players, as well as coach Florian Kohfeldt, confront Siebert over the penalty award, and Kruse could not hide his frustration with the decision in a post-match interview.

"That is ridiculous. What do we have VAR for?" Kruse said.

"I don't want to say anything else, what the referee told me on the pitch is enough already."

Kruse clashed with Bayern defender Jerome Boateng after the game and he explained what happened in the exchange.

"He told me Bayern was by far the better team and they should have been up at half-time by 4-0," Kruse added. "He should not talk to me but celebrate with his fans."

Bayern's captain on the day Muller, though, defended Siebert and said it was the right decision to penalise Gebre Selassie.

"When I saw it in the match it was a clear penalty," the forward said. "Kingsley runs away from him, Gebre Selassie pressures him with his arm and makes him fall over.

"Kingsley is no diver. I can understand that a penalty that leads to a 3-2 always gets discussed, but this decision was right."