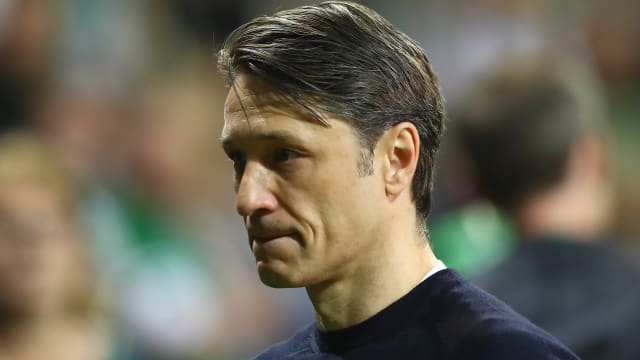 Niko Kovac was unsure if the decision to award Bayern Munich a late penalty in their DFB-Pokal semi-final against Werder Bremen was the right one.

Bayern snatched a 3-2 victory on Wednesday thanks to Robert Lewandowski's 80th-minute penalty, which was awarded for a foul by Theodor Gebre Selassie on Kingsley Coman.

Coman burst into the area down the left and received a slight nudge from Gebre Selassie, leading to the spot-kick being awarded.

Bremen were furious with the decision and Kovac, whose team had given up a 2-0 lead, was unsure if referee Daniel Siebert made the right call.

"I would say it is a tough decision but King doesn't just fall by himself, he got pushed with the elbow. If it's a penalty or not I don't know," the Bayern coach told a news conference.

"Some referees would say penalty, some not. If he doesn't give the penalty we cannot complain.

"But you can clearly see the elbow of Gebre Selassie. If he didn't use the elbow it wouldn't have been a penalty most likely."

Goals from Lewandowski and Thomas Muller had put Bayern in control before Bremen responded through quickfire strikes from Yuya Osako and Milot Rashica.

While unsure about the penalty decision, Kovac said Gebre Selassie's challenge was awkward.

"He acted a bit clumsy in this situation I'd say," he said.

Bayern will face RB Leipzig in the DFB-Pokal final on May 25.