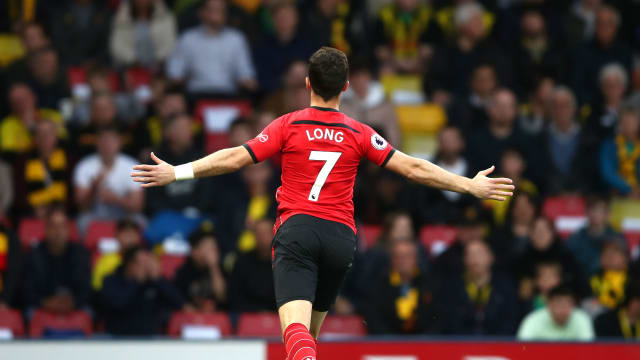 The Republic of Ireland international closed down Craig Cathcart's attempted clearance and powered through to clip over Ben Foster after just seven seconds. The previous record holder was Ledley King, who scored in just under 10 seconds during Tottenham's win over Bradford City in 2000.

Watford goalkeeper Ben Foster twice denied Nathan Redmond with excellent saves before Gray popped up in the 90th minute to ensure a share of the spoils.

Straight to the top

Here's who Shane Long surpassed with his record-breaking goal  https://t.co/X5FTVPxar4#PLpic.twitter.com/vpRsVvhruw

Watford bounced back brightly from Long's early slice of history, an unmarked Gray firing straight at Angus Gunn from 12 yards and Gerard Deulofeu whipping wide from the edge of the penalty area.

Long headed wide at the back post soon after, while Redmond was denied by an instinctive stop from Foster midway through the first half.

The Watford goalkeeper denied Redmond again, superbly pushing his close-range effort against the post, before Ryan Bertrand also clipped the woodwork shortly before the interval after powering into the penalty area to meet a low cross.

Gunn had just kept out Deulofeu's low effort but was powerless to stop Gray's deflected close-range strike from eight yards crashing into the roof of the net to secure a scarcely deserved point or Javi Gracia's side.

What does it mean? Saints edging their way to safety

Southampton will be hugely disappointed to have thrown away all three points at Vicarage Road but that solitary point should still be enough to see them over the line, given their six-point gap over Cardiff with just three games remaining. They have looked like a team reborn under Hasenhuttl and they may start to let themselves to think about what might be achievable under the Austrian after a full pre-season.

Watford's quest to be crowned the 'best of the rest' by securing a seventh-place finish lives on, meanwhile, as Gracia's men look to maintain momentum for next month's FA Cup final against Manchester City.

Shane does not take Long

The 32-year-old has not always been a fixture in the Saints' starting XI this season, but he has rarely let his side down when called upon. His record-breaking strike took his tally to four in just nine Premier League starts.

Cathcart endures a game to forget

The Northern Ireland international was caught napping by Long for what had looked to be the game's decisive goal and was never comfortable in a shaky display.

The Hornets host their rivals for a seventh-place finish, Wolves, on Saturday, in an FA Cup semi-final rematch, while Southampton can secure their Premier League status for another season with a win against Bournemouth at St Mary's on the same day.