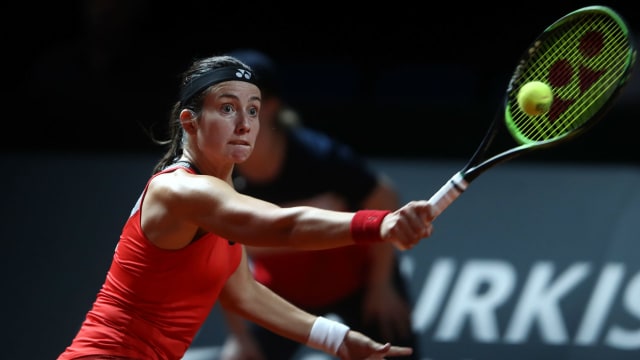 Anastasija Sevastova inflicted a final-set bagel on fellow Latvian Jelena Ostapenko to move into the second round of the Stuttgart Open, while Lara Arruabarrena upset Carla Suarez Navarro in the Istanbul Cup.

Seventh seed Sevastova came through a topsy-turvy encounter 6-2 4-6 6-0 to move into the second round on Tuesday.

Sevastova broke her compatriot seven times to advance and will face Laura Siegemund in the last 16.

"I don't think it was a nice feeling for us both," world number 13 Sevastova said of facing the 2017 French Open champion. "At the end of the day, you just concentrate on yourself.

"It's Stuttgart, it's the first match, you play like it's any other match - you try. It's hard, but that's the thing that I did."

#PTGP19 Second round bound it is for Anastasija Sevastova!

Sixth seed Kiki Bertens was a 7-5 6-2 winner over Anna-Lena Friedsam, while Daria Kasatkina defeated Elise Mertens 7-6 (10-8) 7-5 on a day that saw Simona Halep withdraw due to a hip injury.

The 30-year-old was by no means the only seed to bow out, with Katerina Siniakova beaten by Elena Rybakina after Maria Sakkari and Viktoria Kuzmova were also defeated.