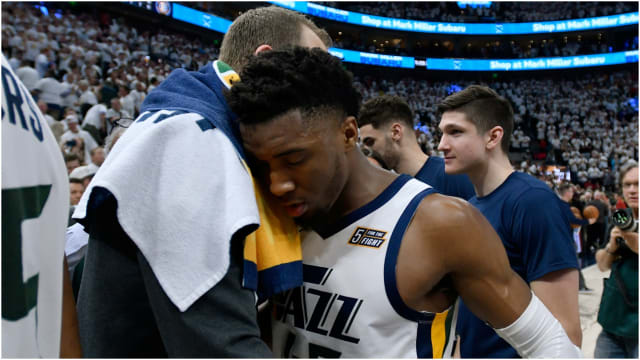 Donovan Mitchell thanked his Utah Jazz team-mates after he revived their playoff series hopes against the Houston Rockets.

The Jazz pulled the series back to 3-1 with victory in Game 4 as Mitchell put up 31 points in a 107-91 defeat of the hotly tipped Rockets.

And, while Utah still have it all to do if they are to take Houston to seven games, second-year shooting guard Mitchell acknowledges he has become used to tricky hurdles in his time in the NBA.

"That's who we are. We've had our backs up against the wall plenty of times in the past two years we've played together as a team," he said. "I think this is familiar ground with us.

"Everybody responded the way we expected them to. The biggest thing to do is to take what we did today and multiply it, because I think we can play even better.

"I think we can do different things better – they got a few open looks – but if we continue to play with the same intensity as we did tonight, and in Game 3, then anything can happen."

Despite his individual heroics on Monday, Mitchell took the opportunity to pick out numerous team-mates for their help in allowing him to thrive.

"I've played with a lot of close friends and the support I've got since I arrived – not just from the community but also my team-mates – has been huge," he said.

"Me being able to do what I do on a daily basis is not the norm in this league for a second-year guy – or even a first-year guy last year.

"My team-mates have had my back with every mistake, with everything I've done well. When you have that support system in the locker room every day, it makes it easier.

"Having guys you can look to [helps]. Kyle [Korver], I've asked him a thousand questions since he's been here about whatever.

"Being down 3-0, you've got to talk. I have so many resources I can go to. As a player who wants to learn, I'm finding ways to learn.

"It's not always going to be perfect, but to have team-mates who have your back through the ups and downs means the world."