Long's Premier League record will be hard to beat – Hasenhuttl 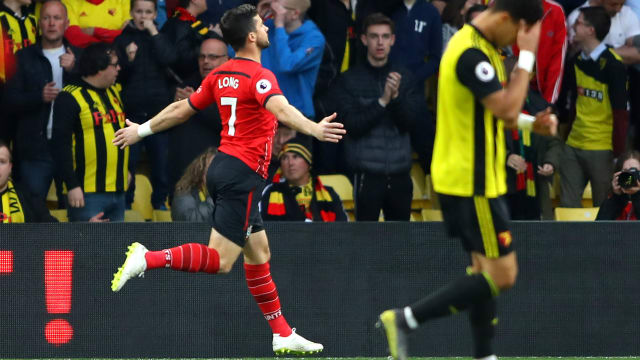 Long's record-breaking goal after just seven seconds helped Southampton to a 1-1 draw at Watford on Tuesday as Hasenhuttl's men moved further clear of the relegation zone.

Ledley King's 10-second record – which had stood since 2000 – was shattered by Long when the Republic of Ireland international closed down Craig Cathcart's attempted clearance and powered through to clip over Watford goalkeeper Ben Foster.

Long revelled in the record post-match, saying: "The manager said to make a quick start and put them under pressure. It's a nice record to have."

And Hasenhuttl heaped praise on Long, telling reporters: "It was fantastic I think. It was a very good signal after the game on Saturday where I was really not happy about the first half where we were not aggressive enough.

"I think they listened very well, especially Shane Long. He was so quick and so quick attacking. After the ball win that is one thing but to score also is another thing.

"I think he has a little bit the image that he doesn't score so much but in the last four games three goals. It's amazing and an amazing performance he shows in the moment. I am absolutely happy with him."

Hasenhuttl added: "It's not so easy [for the record to be broken]. The only chance is to shoot from the middle line. That is the only chance to beat this record because much faster is not possible I think."

Watford managed to secure a share of the points thanks to Andre Gray's late strike at Vicarage Road.

Gray popped up in the 90th minute to salvage a point for Watford, who leapfrogged Everton into seventh position in the Premier League.

"We conceded in the last games two similar goals. But if we speak about players like Ben Foster and Craig Cathcart, they are players who are always very concentrated. It's something, in my opinion, that sometimes happens and you never know exactly why," Javi Gracia said.