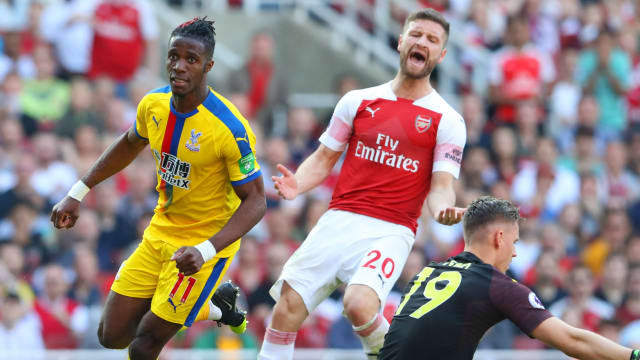 Unai Emery insisted Shkodran Mustafi is good enough to play for Arsenal, despite the centre-back coming under fire for his performances.

Mustafi was at fault for two of Crystal Palace's goals in Arsenal's shock 3-2 Premier League defeat at the Emirates Stadium on Sunday.

The 27-year-old has split opinion since joining from LaLiga side Valencia in a reported £35million transfer in 2016, but Emery has no doubt about the German's quality, citing his man-of-the-match showing in the 1-0 win at Watford on April 15.

"I want to protect the players," Arsenal boss Emery said ahead of Wednesday's trip to Wolves. "Mustafi is a very good player, a very good centre-back. He has the habit of doing a tackle and going to ground, using his anticipation against the opposition.

"He can win one [tackle], win two, win three, win four - but if he loses one he is the picture and if we concede a goal he is the big picture. I have spoken to him: 'you are young, you can improve and you need to work hard because you have a big quality for a centre-back'.

"For example, against Watford, he was the best of all the players, he won all the balls in the air with his head and that is a very good statistic for him. On Sunday against Christian Benteke it is more difficult to win every ball in the air but it was 50-50."

Emery has switched between a three and four-man defence during his first season in North London, and the Spaniard believes it suits Mustafi playing alongside two other central defenders.

"When we use three centre backs, we protect them more," Emery said. "You can anticipate, and you can lose one [tackle] but we have two who are covering. When we have only two, if you lose the anticipation, there is only one behind. That is happening a lot with Mustafi, but I want him to not do the tackle on the ground every time.

"You have to be clever in your mind about what is the moment to go [to ground] and what is not the moment, but that is part of the process."

Mustafi let Wilfried Zaha get the wrong side of him for Palace's second goal, but Emery has absolved him of any blame.

"He is young, he is improving and Sunday he is in the big picture because of the second goal. But it's not his mistake. The mistake was tactical because we need to protect him with two centre-backs against Zaha. I protect him because I believe in him."

Arsenal are fifth and a point behind fourth-placed Chelsea, who occupy the final Champions League spot.