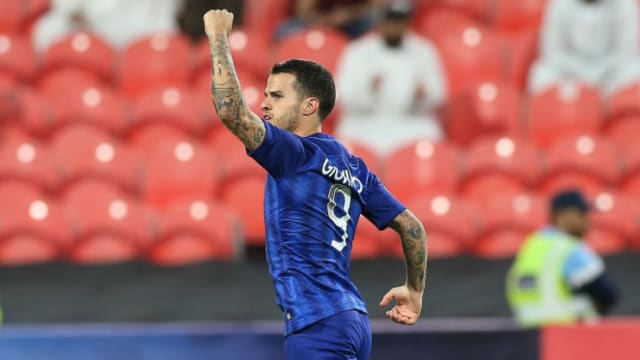 Sebastian Giovinco's first AFC Champions League goal ensured Al-Hilal went top of Group C as the Saudi Arabian side held on to record a 1-0 win over Esteghlal, despite playing the final 38 minutes with 10 men.

Former Juventus and Toronto forward Giovinco, who joined Al-Hilal in January, collected Nawaf Al Abid's pass on the edge of the box and rifled home an unstoppable shot in the 51st minute.

Al Abid was then dismissed for a second yellow card a minute later, yet Esteghlal were unable to find an equaliser, with Al-Hilal in pole position to qualify for the knockout stages having taken nine points from their four games.

Qatar's Asian Cup hero Almoez Ali scored one and made the other to inspire Al Duhail to a 2-0 win over Al Ain that moved them three points clear of third-placed Esteghlal in the group.

Ali scored a record-breaking nine goals in the Asian Cup as Qatar won the trophy in February and he found the target for the first time since that tournament before setting up Youssef El-Arabi.

Melbourne Victory became the first club eliminated from the competition, though they did pick up their only point in Group F so far when Jai Ingham cancelled out Huang Bowen's opener in a 1-1 draw with Guangzhou Evergrande.

Hayato Araki's first-half goal moved Sanfrecce Hiroshima two points clear at the top of that pool as they beat Daegu 1-0, while Group A leaders Zob Ahan maintained their unbeaten start thanks to a 2-0 victory over Al Wasl, with Al-Nassr moving above Al Zawra'a into second having come from behind in a 2-1 success.

Sydney FC remain winless after they held Shanghai SIPG to a 2-2 draw, which was also the scoreline in the other Group H game between Kawasaki Frontale and Ulsan Hyundai.