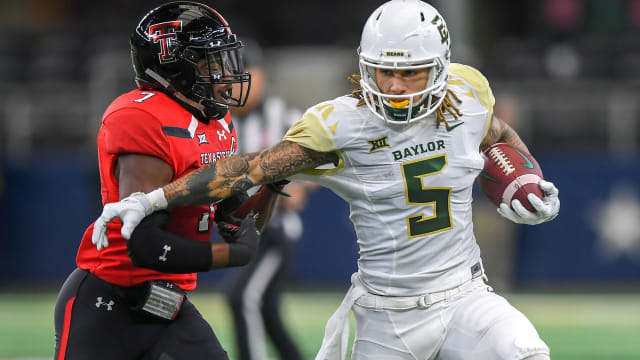 Unless you have been living under a rock, you could probably guess dual-sport star Kyler Murray will be the top pick of the upcoming NFL Draft.

But what about the up-and-coming players whose names are not mentioned as frequently? After all, some of the league's all-time greats, including Bart Starr (17th round), John Stallworth (fourth round) and Tom Brady (sixth round) were selected late.

Here are five sleeper prospects to watch for ahead of the 2019 NFL Draft:

Sweat saw his stock dip in February when his pre-existing heart condition was revealed at the NFL combine, but that does not mean he should be counted out.

Despite his health concerns, which doctors deemed to be low-risk, Sweat remains a sought-after prospect. He impressed at the combine, setting a 40-yard dash record for a defensive lineman by running a 4.41 at 6-5 and 260 pounds. Not to mention he racked up 19 sacks and 98 total tackles in his two seasons with the Bulldogs in addition to back-to-back selections to the first team All-SEC squad.

He will not go as early as initially predicted and a first-round selection was even reported to be a stretch at this point, but that could make Sweat all the more intriguing.

Hurd got his start as a running back at Tennessee before transferring after the 2016 season. He sat out all of 2017 and later converted to wide receiver as a senior, a move that ultimately paid off as he led the Bears with 69 receptions for 946 yards in his lone season at the position. He managed 1,288 yards rushing his sophomore campaign with the Vols.

His 40-yard dash time of 4.64 seconds at the combine was not great, though his recovery from a knee injury could have been a factor, and he made up for it by hitting 35.5 inches on his vertical jump and over 10 feet on his broad jump. At 6-4 1/2 and 228 pounds, Hurd has both power and speed working in his favour.

Given his experience and ability to contribute in the backfield, Hurd is sure to be a valuable asset wherever he lands.

Williams' name is not commonly found on mock boards, though he possesses the qualities worth seeking out in a reliable rusher.

In his three seasons with the Cougars, Williams became one of the most productive offensive players in the program's history. He tallied 16 touchdowns last season, just one short of matching the single-season record set by Steve Broussard in 1989, and added a career-high 81 catches, which was the most receptions among running backs at the FBS level.

Williams ended his college career with 2,976 all-purpose yards and 27 touchdowns.

Gaillard is not among the most coveted players at his position, but his resume proves he should be included in the discussions.

He measured in at 6-2 5/8 and 305 pounds at the combine, much heavier than he was during his time in Athens in which he started 42 of 44 games played. He also boasts 10 3/8 inch hands, 33 1/2 inch arms and an 81-inch wingspan, all of which he put to good use as he packed powerful punches to pummel defenders.

Gaillard has already had formal interviews with the Los Angeles Rams, Oakland Raiders and Minnesota Vikings in addition to talks with at least five other teams, so clearly his competitive nature and leadership qualities have garnered attention.

Prescod's stock took a dive after he failed to draw an invite to the combine and posted lacklustre numbers at the school's pro day.

Nonetheless, the 6-5, 334-pound prospect is a powerful run blocker who moves well considering his enormous size and is a terrific anchor in pass protection. He gave up only six quarterback hurries in 342 pass-blocking plays last season.

Despite dealing with nagging injuries throughout his college career, Prescod is primed for the pros.