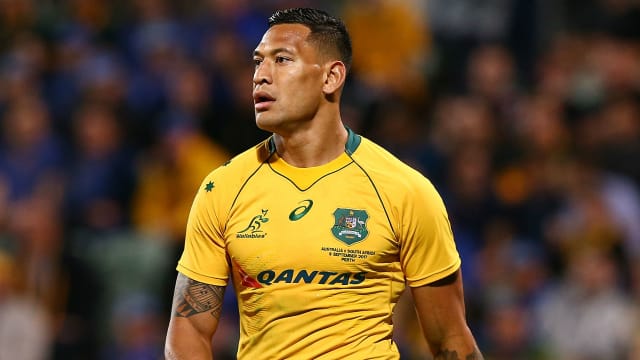 Israel Folau's code of conduct hearing with Rugby Australia (RA) has been set for May 4.

Wallabies and Waratahs back Folau is contesting the breach notice issued to him last week in the aftermath of an anti-homosexual social media post.

The hearing to determine whether RA's intent to terminate Folau's contract will be upheld is to be overseen by a tribunal at the Rugby AU offices in Sydney.

A reserve day of May 5 is expected to be used due to the "complex and unprecedented" nature of the matter.

Folau was warned over his conduct by RA last year after stating homosexuals would go to "hell" unless they "repent their sins and turn to God".

The 30-year-old again put forward his interpretation of his devout Christianity this month after the Tasmanian Parliament passed legislation to make gender optional on birth certificates and allow people aged 16 and older to legally change gender without parental consent.

He added: "Those that are living in Sin will end up in Hell unless you repent. Jesus Christ loves you and is giving you time to turn away from your sin and come to him."

Addressing the Tasmanian legislation specifically, Folau retweeted a news article and said: "The devil has blinded so many people in this world, REPENT and turn away from your evil ways. Turn to Jesus Christ who will set you free."

Waratahs' fly-half Bernard Foley says he is "conflicted" about the situation.

"He has hurt the team, which is not why we play sport. We are a team and we encourage diversity and everything," Foley said.

"I also don't think Izzy is a bad guy. So, there is a lot of conflict there. But I don't agree with what he's done. It's a tough situation."