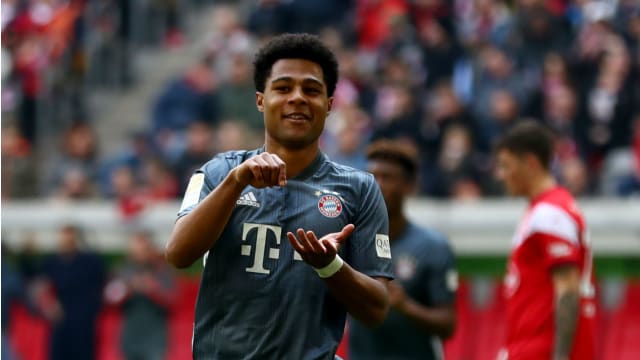 Niko Kovac is delighted with the form of Kinglsey Coman and Serge Gnabry, as Bayern Munich prepare to face Werder Bremen in a DFB-Pokal semi-final.

Both wingers have excelled in recent games, with Gnabry scoring in three successive matches in all competitions prior to Saturday's tight 1-0 win over Bremen in the Bundesliga.

Gnabry presented Bayern's biggest threat throughout the encounter at Allianz Arena, and was unfortunate to find Bremen goalkeeper Jiri Pavlenka in fine form.

Niklas Sule's deflected strike ultimately earned Bayern a win that saw them edge closer to the Bundesliga title, although second-place Borussia Dortmund did respond with a thumping 4-0 win over Freiburg.

And, ahead of a rematch with Bremen in the Pokal on Wednesday, Kovac lauded the impact of Coman, who has started Bayern's last five league matches after returning from injury, and former Arsenal forward Gnabry.

"One reason they have only played together seven times is Kingsley's injury, he's a player we missed a lot," Kovac told a news conference.

"He's very important with his speed, dribbling power and momentum, and we have the situation that Arjen [Robben] is injured longer [so] Coman and Gnabry are playing together more often, they are doing very well and that's going to stay that way in the next few weeks.

"They are top forwards, and the good clubs in the good leagues always see three forwards running around. We have to have such types of players, and now it works. Coman is well again and Serge has made a very good contribution to the team."

Kovac: "It will be a different game at their place. I'm expecting a different @werderbremen_en side looking to hurt us on the counter. It will be more difficult than it was on Saturday."#DFBPokal#SVWFCBpic.twitter.com/XDMVXGs5uu

Kovac's first season at Bayern has been a frustrating one, though the Bavarians are now in the hunt to claim a league and cup double, despite having trailed Dortmund for much of the Bundesliga campaign, and Kovac insists his side are fully focused on reaffirming their domestic dominance.

"We have chances to win two titles, in the league with two wins and two wins in the Cup," Kovac said.

"It will not be easy, we want to win both titles and our will for that can move mountains.

"It's an away game for us. In Bremen, the whole city will be electrified, so it will be more difficult for us, but we are not pessimistic, on the contrary we are optimistic."