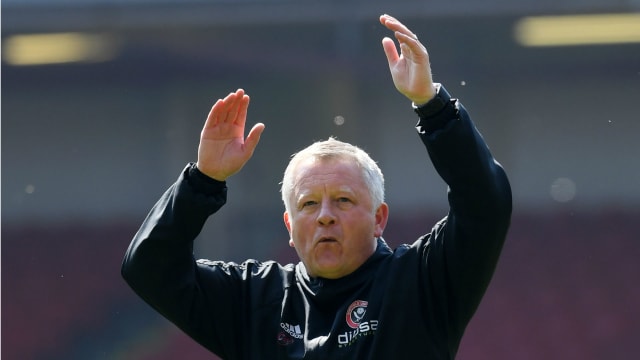 Sheffield United claimed another big win in their bid for promotion from the Championship as they beat Hull City 3-0 to pile the pressure on Leeds United.

With Leeds facing Brentford in Monday's late fixture, the second-placed Blades moved three points clear of Marcelo Bielsa's side with a dominant display at KCOM Stadium.

Above them, Norwich City were held to a fourth successive draw, and with two games remaining, their lead has been reduced to just three points.

Play-off candidates Middlesbrough and Bristol City succumbed to defeats at Nottingham Forest and Sheffield Wednesday respectively, and Derby County took the chance to move into the top six thanks to a Harry Wilson late show against QPR.

In the early game, Aston Villa beat Millwall to claim their 10th successive win, while at the other end of the table Wigan Athletic secured safety with a 2-0 victory over Preston North End.

BLADES SHARP AS THE RUN-IN HOTS UP

Having seen off Forest on Friday, Sheffield United took full advantage of playing before Leeds by dismantling Hull in a Yorkshire derby.

Chris Wilder's side took the lead 10 minutes in – David McGoldrick heading home unmarked from John Fleck's corner – and the Blades never looked back.

McGoldrick doubled his tally 12 minutes later, curling in an excellent finish from 25 yards out, with Enda Stevens capitalising on more slack Hull defending to effectively wrap up the points before half-time.

While securing automatic promotion will be the priority, United are just three points behind Norwich with two games – against Ipswich Town and Stoke City – still to come.

A matter of weeks ago, it looked as though Norwich's charge to the title, and the Premier League, was a mere formality.

Now, however, after yet another draw, things look a bit more complicated for Daniel Farke's side. Depending on Leeds' result against Brentford, there could suddenly be a three-way tussle for not just promotion, but the title.

Norwich dominated proceedings for much of Monday's encounter at Stoke, with Onel Hernandez beating Jack Butland in the 24th minute.

But the hosts fought back through Ashley Williams' header, and though Teemu Pukki restored Norwich's lead, Thomas Edwards drew Stoke level once more to secure a share of the spoils, and delay the Canaries' promotion celebrations.

Reaction from The Boss: “We were of course hoping for a win to make our lives more easy, but of course success never comes easy.” #ncfcpic.twitter.com/0oiP73Qwgb

Derby moved into the final play-off spot thanks to a dramatic 2-0 triumph over QPR, though Frank Lampard's side relied on a contentious penalty to break the deadlock.

With 94 minutes played, referee David Webb harshly deemed that Luke Freeman had fouled Jayden Bogle, and Liverpool loanee Wilson made no mistake with a composed finish.

QPR rallied, with Pawel Wszolek seeing an effort hooked off the line, but the result was settled when Derby raced clear – Wilson tucking in his second in the 101st minute.

Derby's move into the play-off spots comes at the expense of Middlesbrough, who lost 3-0 at Forest, while Barry Bannan's stunner set Sheffield Wednesday up for a 2-0 win over Bristol, who drop to eighth.

Villa seem to be hitting top form at just the right time, as they all but guaranteed a play-off place with a 1-0 win over Millwall – Jonathan Kodjia on target for Dean Smith's side.

Millwall's defeat handed Wigan a boost ahead of their clash with Preston, who had Ryan Ledson sent off as the Latics secured the points with goals from Leon Clarke and Lee Evans.

In the process, Wigan moved onto 48 points, enough to make sure of their Championship status for another season after Rotherham United lost at home to Birmingham City.