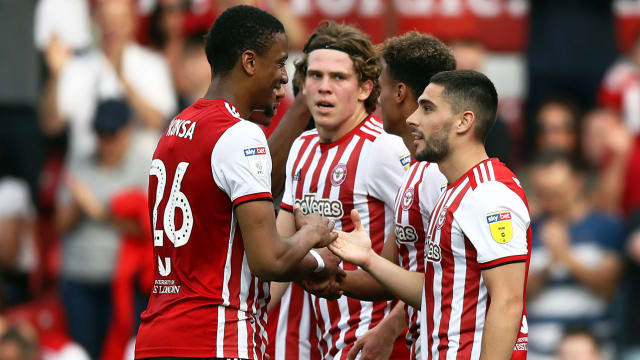 Leeds United's automatic promotion hopes are hanging by a thread after they lost 2-0 at Brentford on Monday, leaving them three points adrift of second-placed Sheffield United with two games left.

Brentford went into the game with just one win in eight, but they were by the more cohesive side going forward and were good value for a win that has Leeds looking destined for the play-offs.

There was little to separate the two teams during an even first half, but Leeds should have been given a penalty when Patrick Bamford was tripped in the box while slipping the ball through Julian Jeanvier's legs.

Referee James Linnington failed to award it, however, and Neal Maupay capitalised with his 24th league goal of the season just before the break, stabbing home brilliantly from outside the box.

Sergi Canos – formerly of Leeds' promotion rivals Norwich City – doubled the lead in the 62nd minute, latching on to a through pass and cleverly flicking over Kiko Casilla.

Despite Leeds' desperation, Brentford continued to look the more threatening, with Maupay acrobatically firing just over, before Canos was denied a wonderful solo goal by Casilla.

Leeds failed to pull one back, meaning they remain three points behind the Blades – 3-0 winners over Hull City earlier in the day – and six adrift of Norwich, who slumped to a fourth successive draw in a 2-2 tie with Stoke City.

Another point for the Canaries will confirm their promotion back to the Premier League.