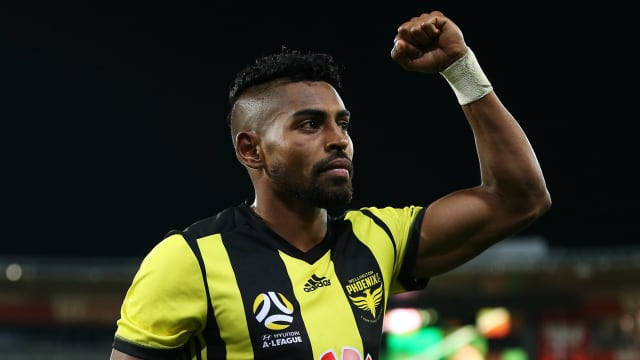 Roy Krishna completed a hat-trick in dramatic circumstances as Wellington Phoenix boosted their top-four hopes with a last-gasp 3-2 win over Melbourne City in the A-League on Sunday.

The in-form striker, who now tops the league's scoring charts with 18, had twice seen goals cancelled out by Riley McGree at Westpac Stadium.

But Krishna delighted the home fans in the fourth minute of injury time when he poked home from a scramble at a corner, taking him to 50 career A-League goals in the process.

City had been frustrated by a series of fine saves from home goalkeeper Filip Kurto and, ahead of the last round of the regular season, Wellington can now overhaul Adelaide United in fourth and seal a home semi in the Final Series.

Kurto had already come to Wellington's aid on a couple of occasions by the time Krishna provided a clever flicked finish on the slide from Max Burgess' throughball in the 27th minute.

McGree levelled with a clever left-footed effort through a sea of bodies after Kurto made a fine double save three minutes before the break, but Krishna broke the record for most goals in a Wellington season with a fierce edge-of-the-box drive early in the second half.

An expertly taken low strike from McGree levelled things up again and City whacked the crossbar through Shayon Harrison's free-kick.

Indeed, the visitors appeared the more likely to score until Krishna's late intervention sealed a big three points for Wellington.