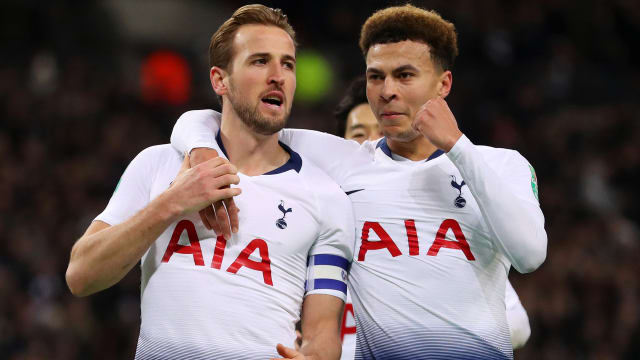 Deli Alli believes Tottenham's dream run to the Champions League semi-finals is down to the success so many of their stars enjoyed at last year's World Cup.

Spurs had nine players reach the semi-finals at Russia 2018, though Mousa Dembele has now departed for the lucrative Chinese Super League.

Domestically a Premier League title challenge ended with damaging defeats to Burnley and Chelsea in February, while they were knocked out of the EFL Cup and FA Cup in the space of four days in January.

But Europe's greatest prize remains a distinct possibility after Spurs upset Manchester City over two legs to book a semi-final date with Ajax.

And England star Alli, part of the Three Lions team beaten by Croatia in the last four at the World Cup, believes their continental success has roots in Russia.

"I think it's definitely the case that what happened at the World Cup has helped us as a team," he said.

"We got a lot of experience from the tournament, in different situations, winning and losing. With that experience, we have begun to show that we are learning and that's what has happened in the Champions League.

"Each season we are improving, in both the Premier League and the Champions League. We are heading in the right direction and we have got to keep doing that.

"When I first came to Spurs, we had a great team, great players but maybe we didn't have the experience we needed when we got to this point of the season. But, by sticking together and having tasted various experiences, we are just getting better and better."

The story of a magical night in Manchester.

It has been 11 years since Spurs last won a trophy, while City's revenge 1-0 win at the Etihad Stadium on Saturday left their top-four hopes in the league this season in danger.

And Alli is under no illusions that Tottenham have to turn potential into success.

"Of course, we want to challenge for trophies. We've had seasons where we have come so close and we should have probably been closer in the Premier League again this season," he added.

"There were a few poor games at crucial points of the season, but it's switched around again.

"We still have to make sure we finish in the top four again, which we should have made much more comfortable than we have.

"We will have to manage the games coming up, there has to be a strategy. But we are in the semi-finals now, so there is no reason why we can't believe."