Nadal: I probably played one of the worst matches on clay in 14 years 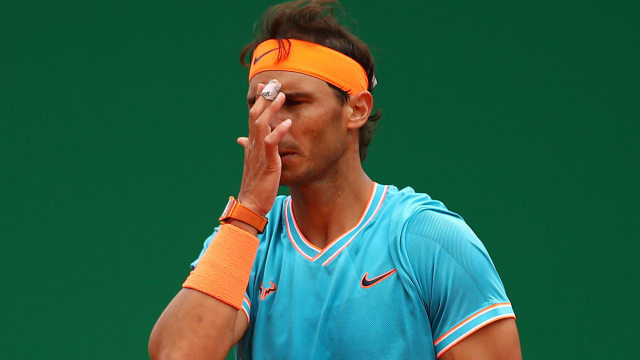 Rafael Nadal described his performance against Fabio Fognini as one of his worst on clay in 14 years after a surprise semi-final exit at the Monte Carlo Masters.

The Spaniard suffered his first defeat at the tournament since 2015 as he was beaten in straight sets by an inspired Fognini, who will face Dusan Lajovic for the title on Sunday.

Nadal had led 3-1 early in the first set but then lost 11 of the next 14 games, Italian Fognini producing some inspired tennis to stun the 11-time champion after one hour and 36 minutes on court.

The result ended the second seed's 18-match winning streak in Monte Carlo - he had not even dropped a set there since his clash with Kyle Edmund in the second round two years ago.

After a rare setback on clay, an honest Nadal praised Fognini while admitting "everything" had gone wrong for him.

"The vision was clear, but I played a very bad match against a good player, so in that situation, you have to lose," he told the media

"That's what I did this afternoon. It was a tough day and he was a difficult opponent.

"It was this kind of day that everything went wrong. I probably played one of the worst matches on clay in 14 years. Today I deserved to lose because I played against a player that was better than me."

Nadal was returning to action on the ATP Tour in Monte Carlo after having to withdraw from his semi-final against Roger Federer in Indian Wells midway through March due to a knee issue.

While disappointed to lose to Fognini, the left-hander acknowledged injury problems take a toll, both mentally and physically.

"I am coming from low moments in terms of injuries, and in terms of the mental side it has not been easy to accept all the things that have been going on," he added.

"It is more difficult to hold the same level every single day when you don't have confidence in tournaments in a row or matches in a row. And that's what I needed."