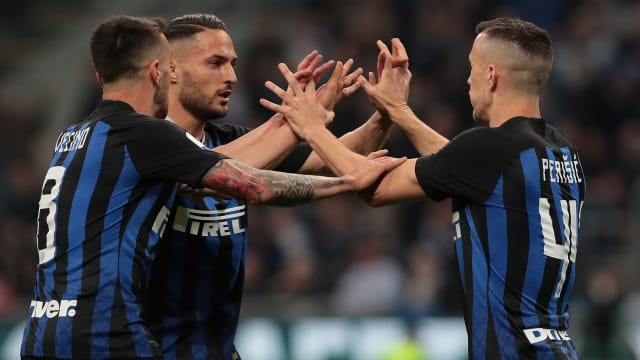 Ivan Perisic cancelled out Stephan El Shaarawy's stunner as Inter protected their six-point lead over Roma in a 1-1 draw at San Siro on Saturday.

Victory for either side would have given a new complexion to the scramble for top-four places but the Nerazzurri did neighbours AC Milan a favour by eking out a well-earned draw.

Roma's inability to see out the result means they remain a point adrift of the fourth-placed Rossoneri, who earlier settled for the same scoreline at Parma.

Lautaro Martinez replaced the benched Icardi in attack and forced Antonio Mirante to turn a header against the upright in the eighth minute.

Perisic fluffed the follow-up to that chance and soon received a lesson in composure from El Shaarawy, who cut inside two defenders and brilliantly fired beyond Samir Handanovic.

Inter were given a reprieve of their own after the restart when Lorenzo Pellegrini failed to find the target at the end of a quick break.

Ex-Giallorossi boss Luciano Spalletti turned to Icardi in the 54th minute but it was an unmarked Perisic restoring parity in the 61st minute, making amends for his earlier miss by heading in D'Ambrosio's cross.

Martinez volleyed over with the chance to add a quickfire second and the spoils were shared after Inter captain Handanovic parried away Aleksandar Kolarov's late opportunity, the left-back stumbling under a nudge by Keita Balde.

What does it mean? Nerazzurri preserve status quo

Inter took a handy lead over Roma into this match but, with Juventus their next opponents, knew they had to avoid defeat to stay in pole position for third spot.

A draw will do, even if the time they spent in the attacking third might have warranted more than a point.

The 32-year-old stepped up for Roma, marking his 100th appearance with a performance that included 10 clearances, while little blame for the equaliser can be apportioned to a player who was busy grappling with Icardi.

There is no doubting Cengiz Under's ability as a player but this was not his most memorable match.

The talented attacking midfielder made just eight passes and lost each of his six duels before being replaced by Nicolo Zaniolo at half-time.