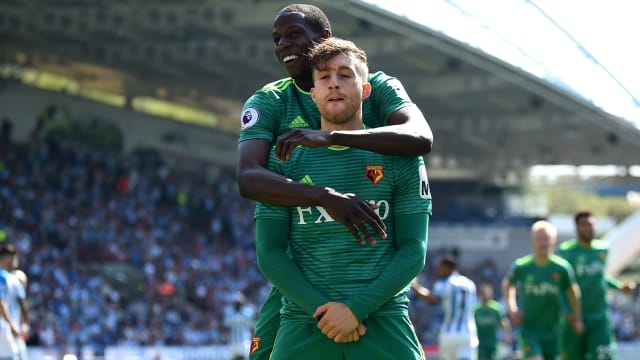 Gerard Deulofeu scored twice as Watford enhanced their chances of finishing seventh with a 2-1 win at relegated Huddersfield Town, who equalled the worst home Premier League record in a single season.

The Spanish forward profited from some slack Huddersfield play early on to open the scoring at the John Smith's Stadium and converted a rebound from close range late on to end the Hornets' three-match losing run on their travels.

Watford had lost three of their last four top-flight matches, either side of beating Wolves to book a place in the FA Cup final, but they got back on track in the west Yorkshire sunshine despite Karlan Grant's late consolation.

Leicester City's draw at West Ham and two dropped points for Wolves at home to Brighton and Hove Albion lifts Watford into seventh place, while Huddersfield's 14th home loss of the season - equalling the Premier League record set by Sunderland in 2002-03 and 2005-06 - sees them cut further adrift at the bottom with their relegation fate already confirmed.

Despite making five changes to the side that lost 4-0 at Tottenham last weekend, it was a familiar story for Jan Siewert's men as they were behind inside the opening five minutes.

Jonathan Hogg was caught in possession and Abdoulaye Doucoure picked out Deulofeu, brought into the side for the suspended Troy Deeney, to convert with a dinked finish via the inside of the post.

Only a save from Jonas Lossl prevented Ken Sema from doubling his side's tally but Huddersfield, who brought on teenage midfielder Matty Daly for a debut with 41 minutes of the match played, also came close through Isaac Mbenza's well-struck attempt that forced Ben Foster to scamper across his goal.

Huddersfield improved as the match went on and nearly levelled when Steve Mounie hooked a shot over the bar, shortly before an off-balance Aaron Mooy was denied by Foster.

Deulofeu added his second goal of the match 10 minutes from time when slotting a rebound past Lossl, who palmed Isaac Success' shot into the ex-Barcelona star's path, rendering substitute Grant's fourth top-flight goal of the season  - a header inside the six-yard box in added time - a mere consolation.

Watford go seventh thanks to a delightful Deulofeu double#HUDWATpic.twitter.com/PveSkHxAte

What does it mean? Watford on course for European football

Finishing seventh this season could offer Watford a route into Europa League qualifying, though they could yet welcome European football back to Vicarage Road by beating Manchester City in next month's FA Cup final.

This victory leaves the Hornets in a strong position to achieve that aim via the league route, but they still have games to come against two of the sides around them - Wolves and West Ham - in the remaining few weeks of the season.

Huddersfield supporters can be forgiven for losing interest, meanwhile, with this seventh defeat in a row doing little to lift the mood around the John Smith's Stadium

Deulofeu sent Watford through to the FA Cup final with two goals from the bench against Wolves two weeks ago. Profiting from Deeney's absence following his red card in the defeat to Arsenal on Monday, the Spanish attacker took his early chance when it arrived, tested Lossl with a couple more efforts and then doubled his tally late on.

Siewert would no doubt have sent out his side with the intention of keeping things tight in the early stages. That plan went out of the window less than five minutes in as Hogg was caught out by Doucoure to leave his side with an early mountain to climb. The midfielder was sacrificed before half-time to make way for debutant Daly, leaving the field after making just 26 passes of the ball.

What's next?
Huddersfield have six days to get over this latest disappointment as they travel to Liverpool on Friday, while Watford have back-to-back home games to look forward to, starting with Tuesday's visit of Southampton.