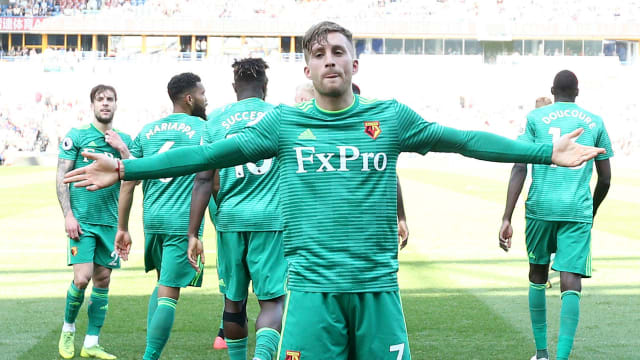 The former Barcelona attacker was brought into Watford's starting line-up after shaking off an injury sustained during his side's dramatic 3-2 FA Cup semi-final victory against Wolves two weeks ago.

Deulofeu, who came off the bench in that clash at Wembley to score twice, maintained his impressive run on Saturday by netting both of the Hornets' goals at the John Smith's Stadium.

Some slack Huddersfield play let the winger in for the opening goal five minutes into the match and he doubled his side's tally 10 minutes from time.

"He's scoring important goals and very good goals," Watford manager Gracia said at his post-match news conference. "All goals are good for me, but in this moment I think Gerard is scoring and he is living an important moment for him and for the team, helping the team with his goals.

"In other moments he didn't score, but always he plays with good commitment and he tries to help the team."

Karlan Grant pulled a goal back for Huddersfield late on but Watford saw through the remaining seconds to end their three match losing run away from home.

Watford are now seventh in the Premier League and have games against Wolves and West Ham, two sides also in contention for a Europa League qualifying berth, in their remaining four league games, before an FA Cup final showdown with Manchester City.

10 - Gerard Deulofeu has been directly involved in 10 goals in his last nine appearances in all competitions for Watford (eight goals and two assists). Electric. #HUDWAT

"There are five games left to finish and when we are in the position we are, it's always important to get the points that are in play," Gracia added. "We need all of our players to keep going and keep playing and we can achieve these kinds of things, when you really are a team and living all the season as a team."

Huddersfield have now lost 11 of their 12 matches under Jan Siewert, but the 36-year-old is keen to take positives out of this latest defeat, which saw teenage midfielder Matty Daly make his debut as a first-half substitute.

"Being on the front foot and then being on the back foot after five minutes really hurt us," Siewert said. "We have several chances against a very well organised side and there’s a good reason they’re in the FA Cup final and a good position in the league.

"I’m pleased we scored and think we could have scored earlier.

"I was really happy with Daly because he had illness and an injury before, so we decided to let him play for the academy for a bit, but today I thought he was ready."