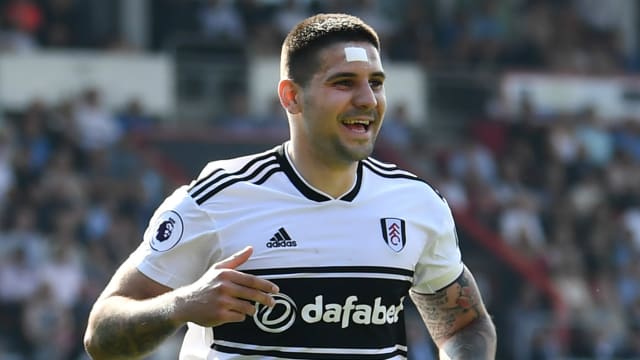 Aleksandar Mitrovic showed he has what it takes to remain a Premier League player with a powerful performance and the winning goal as relegated Fulham beat Bournemouth 1-0 at Vitality Stadium.

The Serbian striker won and scored a second-half penalty as Scott Parker's side chalked up back-to-back victories and the sort of performance they seemed incapable of delivering during a nine-game losing streak between February and April.

The result spoiled Bournemouth manager Eddie Howe's celebrations as he took charge of his 500th game, and he saw Callum Wilson and Ryan Fraser miss big chances just a week after they both scored in a 5-0 mauling of Brighton and Hove Albion.

Bournemouth have three more games to stake their claim for a place in the top half of the Premier League table but on this showing they look unlikely to match their ninth-placed finish of two seasons ago.

Fraser got in behind the Fulham defence and crossed to the feet of Wilson on the edge of the six-yard box but the striker leant back and blazed over the crossbar with his first-time shot.

Mitrovic volleyed over the top at the other end before Sergio Rico made a superb save, getting down to parry Fraser's drive away after the winger's mazy dribble

Junior Stanislas went down clutching his knee after taking a free-kick and was replaced by Jack Simpson, while the best Fulham could muster before the interval was a Denis Odoi header from close range that Artur Boruc got down well to save.

Ryan Babel headed over the crossbar from 10 yards as Fulham pressed early in the second half and they made the breakthrough after Simpson was judged to have fouled Mitrovic in the box.

Mitrovic buried the penalty in the bottom left corner and Fulham continued to attack, Sessegnon twice testing Boruc before Fraser was denied in a one-on-one with Rico having latched onto David Brooks' defence-splitting pass.

Rico twice denied Wilson at close range as Bournemouth sought an equaliser that failed to materialise and Boruc made a superb diving save from Joe Bryan's angled drive to spare his side further blushes.

What does it mean? Fulham stars in the shop window

The likes of Sessegnon and Babel will feel they are good enough to play top flight football and played at a level that suggests that is true, but their failure to deliver earlier in the season will infuriate Fulham fans.

Mitrovic impresses as clubs look on

Rumoured to be a transfer target for West Ham, among other clubs, Mitrovic was in confident mood and he caused Bournemouth problems all afternoon while also grabbing the winner.

After scoring his 12th Premier League goal of the season in Bournemouth's 5-0 rout of Brighton a week earlier, Wilson had a forgettable afternoon and missed a sitter in the opening minutes.

Fulham have the opportunity to drag Cardiff City down towards the Championship with them at Craven Cottage next weekend while Bournemouth make the short journey along the south coast to Southampton.