Barcelona have to suffer to win – Valverde 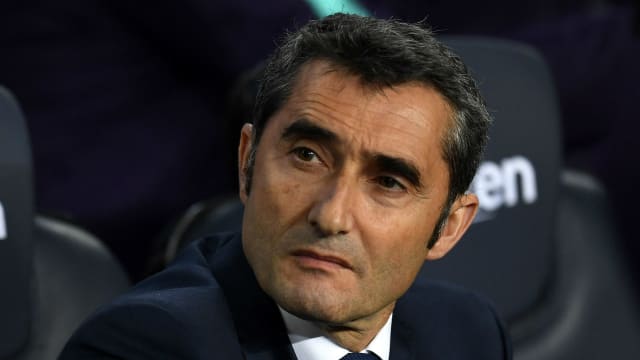 Ernesto Valverde is taking nothing for granted in Barcelona's quest for LaLiga glory despite Saturday's 2-1 win against Real Sociedad bringing the title within touching distance.

Goals from Clement Lenglet and Jordi Alba either side of Juanmi's 62nd-minute equaliser at Camp Nou maintained a nine-point lead over Atletico Madrid at the summit.

If Barca beat Deportivo Alaves on Tuesday and Atleti fail to do likewise against Valencia 24 hours later, Valverde's men would retain their title by virtue of having a 12-point lead with four matches to play and a superior head-to-head record.

Spots in the Champions League semi-finals and Copa del Rey final mean the campaign could end with a clean sweep of major honours but complacency is not on Valverde's agenda.

"The games are not given to you, you suffer a lot to win," Barca head coach Valverde told reporters.

"Winning is much more complicated than people think. I understand people when they say that we are already champions and that we just have to wait for the date, but the points have yet to be achieved.

"We have to get that idea out of our heads. This is not over yet."

Valverde acknowledged Sociedad made life tough for his team.

"It was an uncomfortable match because they were very good and made it very difficult for us off the ball.

"Fortunately, we got the second goal very quickly [after the equaliser] and then we defended it tooth and nail because they pushed us a lot."