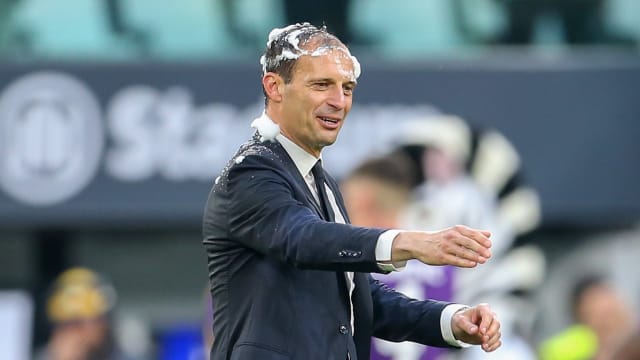 Massimiliano Allegri set his sights on building a better Juventus after reasserting his intention to remain in charge of the freshly minted Serie A champions.

Juve secured an eighth straight Scudetto and fifth in succession under head coach Allegri with a come-from-behind 2-1 win over Fiorentina on Saturday.

Alex Sandro's header and German Pezzella's own goal gave rise to long foreseen celebrations at Allianz Stadium and eased some of the pain of Tuesday's surprise Champions League exit at the hands of Ajax.

No Serie A side has ever sealed the silverware in quicker fashion and the mastermind of the latest triumph quickly turned his attention to plotting the way forward.

"We'll enjoy our Easter meal and after that I'll sit down with the president and the club," Allegri told Sky Sport Italia.

"I'm sure I'll stay with Juventus. I have a year left on my contract but we haven't sat down about that yet.

"It's not a question of the contract, but of our plans for the future.

"Juventus will create a team that can win but evaluation on how to improve still has to happen, as has been the case for the last five years."

The ex-AC Milan boss also defended the injured Paulo Dybala's contribution in what has been the least prolific of his four seasons in Turin.

"Dybala's season was good, especially until January," he said.

"We played many games with him, Ronaldo and Mandzukic. Ronaldo is a goal scorer, just look at the game against Ajax. Next to him you need a striker with different characteristics and Dybala connected the play and worked a lot.

"If you play with three players who stay in front of the ball, the [rest of the team] will tire and when this happens you get in trouble."

Eriksen ‘to travel to Southampton despite Inter Milan transfer reports’

What happened on day one of the fourth Test between England and South Africa?