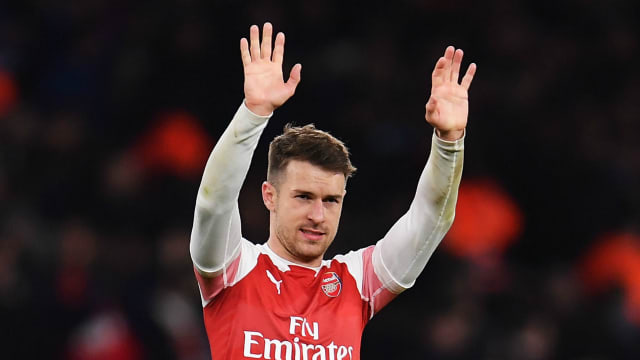 Unai Emery says Aaron Ramsey could be back in action for Arsenal in the next two to three weeks.

Ramsey had to be substituted during the first half as Arsenal knocked Napoli out of the Europa League, booking a semi-final spot, on Thursday.

With the midfielder set to join Juventus when his contract runs out at the end of the season, there were fears Ramsey had played his last game for the club.

But as Arsenal continue to fight for a place in the Premier League's top four, Emery said Ramsey's hamstring injury is not as serious as initially anticipated.

"His progress this season is amazing," Emery told Sky Sports of the Wales international, who joined Arsenal in 2008.

"At the beginning [of the season], he was a little confused maybe, because he is in the last year of his contract.

"For us, and for me, he is a very important player but his confusion maybe did not help us at some moments in the season - not like his performances now.

"In his last few performances he has been helping us a lot - and in some of the key moments of this season.

"His injury is bad news and I don't know how long he will be out of the team, maybe two or three weeks."

Granit Xhaka and Denis Suarez are battling hip and groin injuries to be passed fit in time to face the Eagles.

Arsenal are set to face Valencia for a place in the Europa League final, the Gunners at home in the first leg on May 2 before heading to Spain a week later.

The final could be an all-Premier League affair as the other last-four Europa League clash sees Arsenal's London rivals Chelsea take on Eintracht Frankfurt.