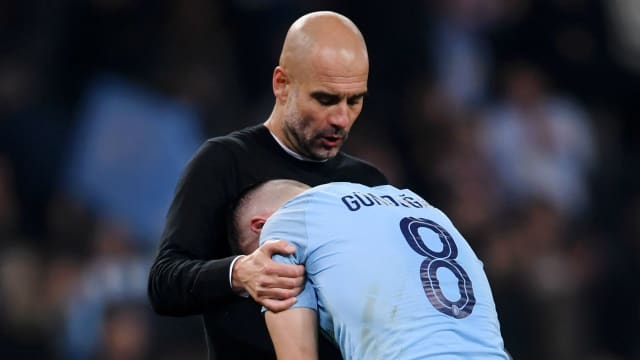 City lost on away goals to Tottenham on Wednesday after a thrilling 4-3 home win that was ultimately not enough at the Etihad Stadium, Raheem Sterling denied a decisive stoppage-time strike by a VAR offside call against Sergio Aguero.

Mauricio Pochettino's side are back in Manchester on Saturday with City needing to refocus on the Premier League.

Liverpool hold a two-point lead at the summit, although they have played a game more.

City will therefore be champions for the second year in a row if they win their remaining five matches, extending a streak that has seen Guardiola's side take maximum points from their past nine top-flight games.

Even though Jurgen Klopp's men have a more congested schedule after knocking out Porto to book a Champions League clash against Barcelona, Guardiola feels that does not give City any edge.

"Title race is win tomorrow. That's the title race for us," Guardiola told a pre-match news conference on Friday.

"What Liverpool do against Cardiff, Newcastle, I'm not involved. I'm concerned about this week - three games in one week, the others I don't know, I cannot control it. I would prefer to be in the semi-finals and the quadruple be closer.

"In November or December there are more games. Liverpool went out of the EFL Cup and the FA Cup quite early, it's an advantage then as we played nine or 10 more games, but at this stage it's no influence to have more or less rest.

"It's a little bit of fact we didn't have too much time to prepare specific things [for the first leg at Tottenham] after the Brighton [FA Cup semi-final] and this game was quite similar because we play all competitions.

"It is what it is when you play for all competitions. You have to live it and we dealt with it really well so I don't have complaints about that."

He's got a knack of scoring against 'em!

Guardiola accepts it may take time for his players to recover from Wednesday's disappointment, when his recent frustrations in the Champions League knockout rounds continued.

"I don't want to see them forget what they lived. People can't forget what happened on Wednesday, we are human beings and it takes time. We play with that feeling," he said.

"What we lived on Wednesday was incredible and we were lucky to live it. For 55,000 people it was the most exciting moment, then one second later… devastated.

"It will always remain in our hearts, but in the future maybe a small smile for our performance. It was incredible how well we played. I don't want to see them think it doesn't matter, we were close. With this we play our game tomorrow.

"It was incredible how we performed, after 1-2 we scored three goals and another, which was a little offside. Inside it hurts and it will be in our minds, but looking back will not help us to move forward. It's tough but stand up and move forward. These players will have another chance to show it.

"They will get what they deserve, next year or in three years they will have the chance to be more lucky, more precise, whatever. We did everything in here [the heart] and here [the brain], with shots on target and the way we played.

"They were fantastic and I'm so proud. We lost, but I am so proud."