Emery expects Ramsey to be out for 'some weeks' 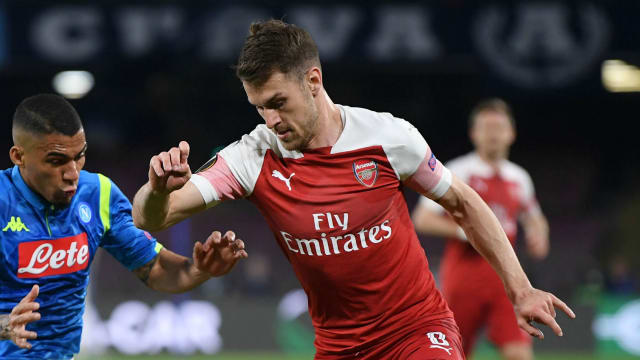 Unai Emery is unsure over whether Aaron Ramsey has played his last game for Arsenal after the Juventus-bound midfielder suffered an apparent hamstring injury during Thursday's 1-0 Europa League win over Napoli.

Alexandre Lacazette's superb free-kick in the 36th minute crowned a 3-0 aggregate triumph for the Gunners but came shortly after a punishing setback for Ramsey.

The 28-year-old Wales international will end an 11-year association with Arsenal at the end of this season and Emery confirmed he had sustained a muscular injury.

"Normally it is going to be some weeks out of the team," he told BT Sport.

"He was in a very good moment. We have other players who have an opportunity also. We need all the players.

"This is something that means we need to use rotation and find the performances."

Asked whether Ramsey had played his last game for the club, Emery replied: "I don't know."

There were few, if any, other blemishes on an accomplished performance that sets up a semi-final for three-time Europa League winner Emery against his former club Valencia.

Most wins in their first 50 games with Arsenal...

"I grew up a lot in this competition and I think the Europa League gives us a big opportunity, when we cannot play in the Champions League, to do something important," he told his post-match news conference.

"It's one title but it gives us the opportunity to play in the Champions League next year, when our domestic league has a lot of teams also trying to take this ticket.

"The Europa League is for us now, with the Premier League, an important competition.

"I think Napoli, with their supporters, showed us they wanted to do something important here. We won because we worked really well and made a big performance.

"We showed good personality to play with our idea. We wanted to keep more of the ball but we didn't do all I wanted.

"In the positional play we were very good and doing good pressing against them because they want to build up possession with combinations.

"We did big pressure against them and were in their box a lot of moments with the possibility to score."

Carlo Ancelotti rued a tale of missed chances for his Napoli side, with Arkadiusz Milik and Jose Callejon the main culprits as the tie slipped away.

"We are not happy, of course, but in the two games where we didn't do too well was the first 20 minutes in the first game," he told BT Sport.

"We tried today and had the opportunities two times. When Arsenal scored it was almost impossible.

"Of course, then we needed to score four goals and we lost a little bit of confidence. It was important for this game to score quickly. We were unlucky and when they scored the game was finished."

Ancelotti added: "We missed opportunities. We could score there, we could score here but Arsenal are a fantastic team. We have to look forward."