WATCH: Giannis takes off from near free-throw line for stunning dunk 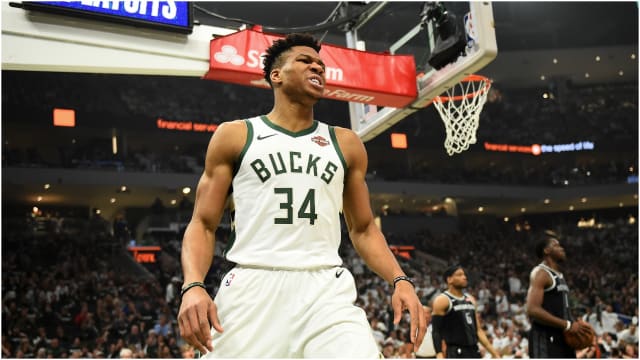 The rest of the NBA had no answer for Giannis Antetokounmpo in the regular season and the MVP candidate did not take long to make his mark on the playoffs.

The Milwaukee Bucks are the top seed in the Eastern Conference and are hoping to get through the first round for the first time since 2001. They made a fine start against the Detroit Pistons on Sunday.

Giannis showed this season that he can mix it with the biggest and best in the NBA and so the Pistons stood little chance when the Greek took flight, displaying his pace and power in one particularly devastating dunk.

The Bucks were on the back foot when Antetokounmpo seized possession and he was at the other end of the floor within a few giant strides, leaping from just inside the free-throw line to throw down in spectacular fashion.

The 24-year-old will take some stopping in this form...

Giannis takes off from just inside the free-throw line for tonight's #KiaTopPlay! #FearTheDeer#NBAPlayoffspic.twitter.com/JHB96APFqR