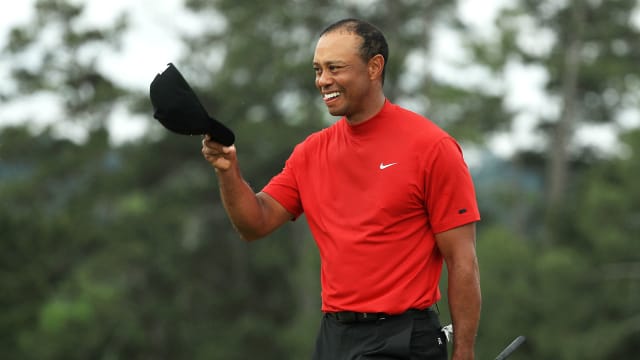 A 2-0 loss at Burnley was a hammer blow for the Bluebirds' survival hopes ahead of their visit to relegation rivals Brighton and Hove Albion on Tuesday.

Victory would move Warnock's men to within two points of Brighton, although the Seagulls - thrashed 5-0 at home by Bournemouth last time out - have a game in hand.

Cardiff manager Warnock feels the way Woods bounced back from professional and personal lows to win his fifth Masters title on Sunday shows that his side are not dead and buried yet.

"It's just an amazing story really, he has been written off that many times - and we have," Warnock told a news conference on Monday.

"Obviously over the last few weeks we have felt sorry for ourselves a few times. We haven't got time to do that tomorrow and if it isn't good enough then we accept it.

"I thought we had to beat Burnley and Brighton if I am honest, so we are already one down. So, it becomes even more important, I think for both teams. I think they must feel the same.

"I thought we were a little bit apprehensive with the occasion [at Turf Moor] and the occasion tomorrow is going to be even bigger.

"But you have to be optimistic. We have had that many kicks in the teeth in the last four months, we keep bouncing back, really.

"We just have to look at the golf and look at what Tiger has done - amazing. Nobody gave him a chance, either. It's an opportunity for us to give ourselves a chance until the end of the season. We have to grab that."

But Warnock, who said he will appeal a Football Association charge over comments he made about match officials after a loss to Chelsea, accepts the odds are against Cardiff.

"Well, we're 20-1 on to go down," he added. "I don’t think Tiger was that far! I think these things do happen. It's a long shot, but I think that's the beauty of football really.

"You just don't know what's around the corner. The supporters have been through it all. They've been the massive plus for us. They were amazing on Saturday and they've been hurt as well by things going against us.

"It's been a very disappointing time for us, but they've been amazing. I'm sure they'll be vocal again tomorrow night. When I'm stood there at the new stadium it's a really good atmosphere down there.

"We've got to play each game. I don't think we can be written off with the games we've got. We can decide the title and the top four. We're still alive. I can't fault the lads. We've worked really hard to win games, so we've got to try again."