On course for 16 and 17? Woods' fond major memories at Bethpage and Pebble Beach 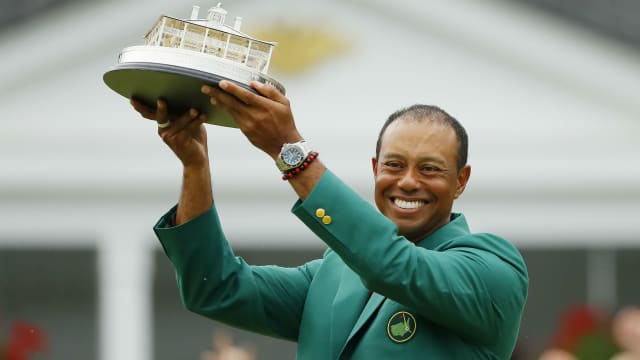 Tiger Woods' triumph at Augusta had many suggesting he could, after all, overhaul Jack Nicklaus' tally of 18 major titles.

Woods' Masters win – the fifth time he has slipped on the green jacket – saw him move to within three of the man they call 'The Golden Bear'.

After a series of back injuries looked set to curtail Woods' career, the 43-year-old is being considered once more as a perennial contender for glory on golf's grandest stages - and the venues for the next two majors in 2019 should provide ample encouragement for further success.

Next month's US PGA Championship takes place at Bethpage, while the U.S. Open in June will be held at Pebble Beach.

Both are courses where Woods has previously prevailed in majors and the bookmakers already have him installed as the 9-1 favourite for each of this year's editions.

Below, we recall Woods' 2000 and 2002 U.S. Open victories as the game's most iconic figure prepares to return to the scenes of some fond major memories.

This record-breaking triumph was truly Tiger at his peak. As the rest of the field toiled in testing conditions, Woods was playing a different game entirely. His supreme confidence was highlighted by a stunning approach to the sixth during his second round, as he fired his ball out of deep rough over a tree to the edge of the green. By the end of the third round he was the only player under par, his 10-stroke lead a record after 54 holes at the U.S. Open. An astonishing bogey-free 67 on the Sunday saw him improve to 12 under, while Ernie Els and Miguel Angel Jimenez were his closest challengers on three over. The margin of 15 strokes remains the largest in major tournaments, with Woods going on to win that year's Open and US PGA Championship, before claiming the 2001 Masters to complete the 'Tiger Slam'.

How many green jackets?  pic.twitter.com/nr73nJLNca

Two years later, Woods regained his title and, having won at Augusta two months earlier, sparked talk of a calendar-year Grand Slam after becoming the first man since Nicklaus in 1972 to take home the first two majors of the season. As at Pebble Beach in 2000, Woods finished as the only player under par – three shots clear of Phil Mickelson, who ended the tournament even par. Leading by four overnight from Sergio Garcia, Woods three-putted the first two holes to allow the Spaniard and Mickelson to within two, but they would never get any closer. This triumph was compared by Sports Illustrated to an American football team running down the clock when in possession of the lead – a slow, steady grind rather than the scintillating canter to victory seen at Pebble Beach two years previously. Still, it proved Woods could win any number of ways and he will not matter how he gets over the line if major number 16 arrives at Bethpage next month.