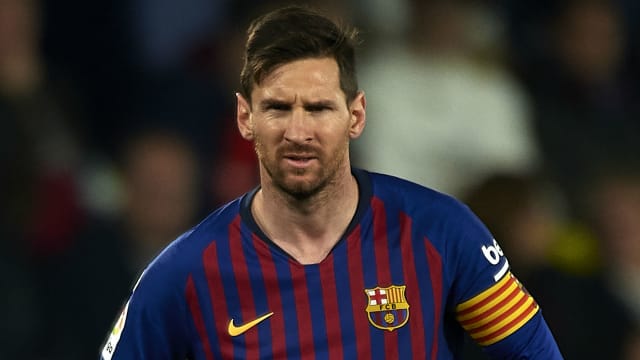 Lionel Messi is fully fit to face Manchester United and ready to end his long drought in the Champions League quarter-finals, according to Barcelona boss Ernesto Valverde.

Star forward Messi skipped the weekend draw against Huesca after an accidental elbow from Chris Smalling left him with a bloody nose and a bruised eye at Old Trafford last week.

The LaLiga club returned from Manchester with a 1-0 advantage, giving them a useful cushion as they look to seal their progression at Camp Nou on Tuesday.

Messi's presence in the starting XI serves as a significant boost but the 31-year-old has not scored at this stage of the competition since 2013, a streak spanning 12 quarter-final appearances.

"Statistics tell you about the past, but not the future. We don't know what's going to happen and that's an incentive for everyone.

"He's fine after the knock he had. He's in perfect shape for tomorrow."

Ousmane Dembele, an unused substitute in the first leg, is in contention to join Messi and Luis Suarez in Barcelona's attack.

The 21-year-old France winger completed over an hour on his return from a hamstring injury against Huesca and could start on Tuesday.

"He didn't play for four weeks but he will be able to participate in this game," Valverde said.

"We're not sure for how long. He played for around 70 minutes the other day and played well. He might start and he might not."

Much of the belief that United can overturn the first-leg deficit has centred on the Premier League club's impressive last-16 fightback against Paris Saint-Germain, as well as their famous triumph over Bayern Munich in the 1999 final when now-manager Ole Gunnar Solskjaer scored a stoppage-time winner at Camp Nou.

Valverde: "Man Utd have won two away games in the last few minutes and we must be alert, must play our game and take the game to our opponent"

Valverde, however, cares little for the influence of history.

"I'm more about writing my own destiny," he said. "Tomorrow we have to write our own destiny and so do Manchester United.

"There's no fear, just tremendous excitement. We're ready to go through knowing anything can happen. I think we're all aware a tough game awaits and we're all looking forward to it."