Woods: I was determined to win for my kids at Augusta 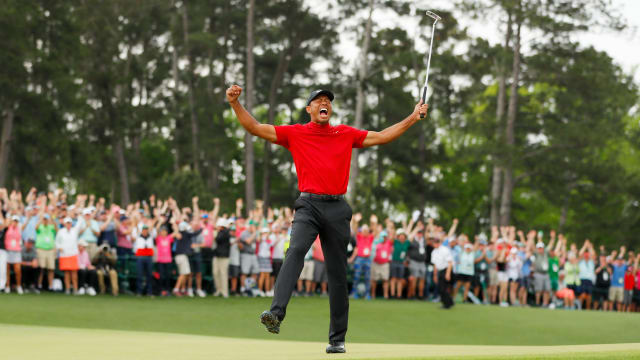 Tiger Woods was driven by the desire not to disappoint his watching children for a second time as he completed a remarkable Masters victory on Sunday.

Woods finally claimed his 15th major title, almost 11 years after securing number 14, as he held off a host of rivals to prevail at Augusta National in a thrilling final round full of twists and turns.

After sinking the winning putt, a jubilant Woods soaked in the moment with his mother and two children, Sam and Charlie, by the 18th green.

"This has meant so much to me and my family, this tournament, and to have everyone here, it's something I'll never, ever forget," said the 43-year-old in a subsequent news conference, as he reflected on enjoying similar celebrations with his late father, Earl, following his 1997 win at Augusta.

"My dad shouldn't have come in '97. I mean, he had heart complications, and wasn't supposed to fly, but he flew and came. [He] gave me a putting lesson on Wednesday night, and the rest is history.

"My dad's no longer here, but my mom's here, 22 years later, and I happen to win the tournament. And then to have both Sam and Charlie here, they were there at the British Open last year when I had the lead on that back nine, and I made a few mistakes, cost myself a chance to win the Open title.

"I wasn't going to let that happen to them twice, and so for them to see what it's like to have their dad win a major championship, I hope that's something they will never forget."

The greatest of all the Tiger celebrations...

Woods' triumph represented the completion of a sensational comeback from multiple back injuries that had threatened his career.

"I had serious doubts after what transpired a couple years ago. I could barely walk. I couldn't sit, couldn't lay down. I really couldn't do much of anything," he added.

"Luckily I had the procedure on my back, which gave me a chance at having a normal life. But then all of a sudden, I realised I could actually swing a golf club again. I felt if I could somehow piece this together that I still had the hands to do it. The body's not the same as it was a long time ago, but I still have good hands.

"I think the kids are starting to understand how much this game means to me, and some of the things I've done in the game. Prior to my comeback, they only knew that golf caused me a lot of pain. If I tried to swing a club I would be on the ground and I struggled for years, and that's basically all they remember.

"Luckily I've had the procedure where that's no longer the case and I can do this again. So, you know, we're creating new memories for them, and it's just very special."