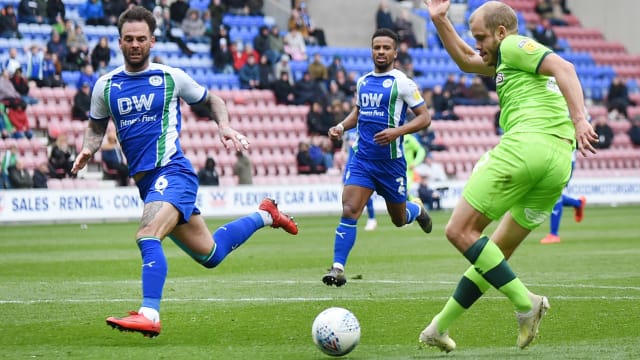 Teemu Pukki scored a late equaliser as Norwich City dropped points for the second Championship game in a row, the leaders drawing 1-1 away to Wigan Athletic to give Leeds United and Sheffield United hope in the promotion race.

The Canaries were held to a 2-2 draw at home to Reading in midweek and they slipped up again at the DW Stadium on Sunday, where Reece James scored the opener with a contentious penalty.

Ben Godfrey was penalised for handball on the stroke of half-time, even though Sam Morsy's shot rebounded off the defender's leg on to his arm.

James beat Tim Krul with the resulting penalty to set up a potential shock, and the Norwich goalkeeper then made a superb save to deny Leon Clarke midway through the second half.

But Norwich levelled in the 81st minute when Pukki, crowned the Championship Player of the Season on Monday, was slipped through on goal by Kenny McLean to slot home his 27th league goal of 2018-19.

Norwich could not force a winner despite eight added minutes, though, and it was instead Wigan who had the ball in the net, Clarke having a header ruled out for a marginal offside during the extended injury time.

With four games to go, Daniel Farke's men are four points clear of Leeds, with Sheffield United - who drew at home to Millwall this weekend after conceding in added time - a further three back.

No Pukki, no party. #EFL | #NCFCpic.twitter.com/1ocyxGSyof