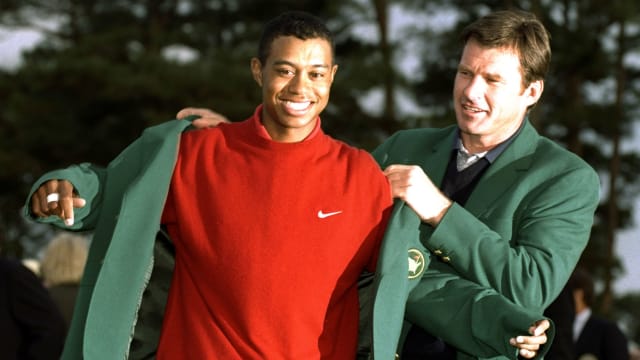 After Woods secured a fifth green jacket by overhauling Francesco Molinari at Augusta, we look back at his first Masters win, which came in 1997.

The youngster had already been tipped for greatness prior to his first appearance as a professional at Augusta, following a glittering amateur career and hugely impressive initial performances in the paid ranks.

However, nobody could have predicted the extent to which the American, only 21 at the time, would sweep all before him between April 10-13, 1997 - triumphing by a record-breaking and scarcely believable margin of 12 shots.

As Woods reached the turn on Thursday, the patrons in attendance could have been forgiven for thinking too much hype surrounded the emerging talent. An outward nine comprising 40 strokes certainly offered no hint of the record-breaking dominance that followed.

18 - Woods' winning score of 18 under represented a new record at Augusta, subsequently equalled by Jordan Spieth in 2015.

21 - Woods was 21 years and 104 days old when he triumphed in 1997 and remains the youngest Masters champion in history .

By the end of round one, Woods was somehow up to fourth - three behind early leader John Huston - after coming back in 30.

A superb 66 on Friday then lifted Tiger clear of the field, but he was far from done there and went one better in the penultimate round to open up an extraordinary nine-stroke lead.

The beginning of the CBS broadcast for Sunday's final round left viewers in no doubt that they were witnessing a day of momentous significance.

"There's a new era about to dawn," began host Jim Nantz, before going on to hail Woods for possessing "a power and grace like the game has never seen before".

Woods' subsequent procession to glory showcased the many qualities that would come to define his lengthy reign as golf's pre-eminent figure, most notably his phenomenal self-belief.

"He continues to play as though there's never a threat of danger at all," Nantz observed as the runaway leader lined up his approach to the fifth. "Any kind of big number to emerge never even seems a possibility with Tiger Woods."

Even Woods was not completely immune to the curse of the commentator and he duly made his first bogey in 37 holes before dropping another shot at the seventh.

However, his lead was never under the slightest threat and four subsequent birdies saw Tiger card an aggregate total of 270, shaving one off the previous benchmark set by Jack Nicklaus 32 years earlier and equalled by Raymond Floyd in 1976.

Golf would never be the same again. The peerless Woods continued to set new standards for a prolonged period, never more so than when he famously completed an unprecedented 'Tiger Slam' at Augusta in 2001 - a second Masters victory ensuring he held all four major titles at once.

The green jacket was once again placed on his shoulders in 2002 and 2005 - and at the time of the latter triumph, few could have imagined that would remain Woods' most recent Masters success up until this week, when he again delivered a performance to delight his many supporters.