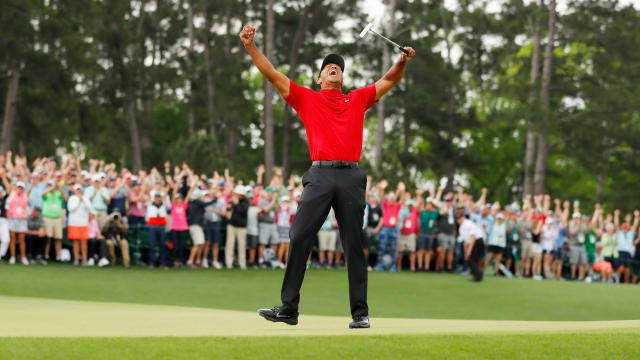 For Tiger Woods, the wait is finally over.

The 43-year-old won his 15th major at the Masters on Sunday, ending a streak without success that stretched back to 2008.

After injuries had at one stage threatened to end his career, he completed his remarkable comeback with a one-shot victory thanks to a final round of 70.

Woods is an icon recognised the world over and, unsurprisingly, he was trending on Twitter after his success.

Here, we pick out some of the notable names who reacted after Tiger roared to major glory once again.

Congratulations, Tiger! To come back and win the Masters after all the highs and lows is a testament to excellence, grit, and determination.

Current president Donald Trump also hailed Woods' ability to perform under pressure during an eventful final round in Georgia. "What a fantastic life comeback for a really great guy!" Trump tweeted.

Love people who are great under pressure. What a fantastic life comeback for a really great guy! https://t.co/41MtJtYEjq

Phil Mickelson declared it a "special day" for the sport that will "go down in history". The left-hander finished in a tie for 18th, ending his work for the week on six under.

What a great moment for the game of golf. I'm so impressed by @TigerWoods' incredible performance, and I'm so happy for him to capture another Green Jacket. Truly a special day that will go down in history. Congratulations, Tiger! #rematch

Jack Nicklaus is now just three clear on the all-time list for major wins, though the 'Golden Bear' roared his approval at seeing his nearest rival close the gap.

A big "well done" from me to @TigerWoods! I am so happy for him and for the game of golf. This is just fantastic!!!@TheMasters

Tom Brady, meanwhile, knows what it takes to win under intense pressure and the New England Patriots quarterback - a six-time Super Bowl champion, of course - provided just one word to sum up Tiger's display down the stretch: "Clutch."

Brady was not the only NFL player to tweet - Houston Texans defensive end JJ Watt wrote: "Nobody holds the entire viewing audience of their sport in the palm of their hand the way Tiger Woods does. It’s truly incredible."

Nobody holds the entire viewing audience of their sport in the palm of their hand the way Tiger Woods does. It's truly incredible. #TheMasters

Meanwhile, there were two reasons to celebrate for Seattle Seahawks quarterback Russell Wilson - a win for Woods and the return of Game of Thrones!

Tiger Wins. #GOT Is back. WHAT A DAY! pic.twitter.com/DEhbdAGNNk

The NBA world was also watching on - Steph Curry of the Golden State Warriors declared Woods' success to be the "greatest comeback story in sports" ... and also cheekily asked the new champion if he could hold one of his five jackets!

Greatest comeback story in sports! Congrats @TigerWoods Let me hold one of those 5 jackets one time!

Los Angeles Lakers great Magic Johnson, meanwhile, proclaimed: "The roar of the Tiger is back!"

A big BIG congratulations to @TigerWoods for winning the Masters!! The roar of the Tiger is back!

Tennis star Serena Williams revealed Woods to be an inspiration, admitting she was moved to tears by what she had seen unfold at Augusta National.

I am literally in tears watching @TigerWoods this is Greatness like no other. Knowing all you have been through physically to come back and do what you just did today? Wow Congrats a million times! I am so inspired thank you buddy.