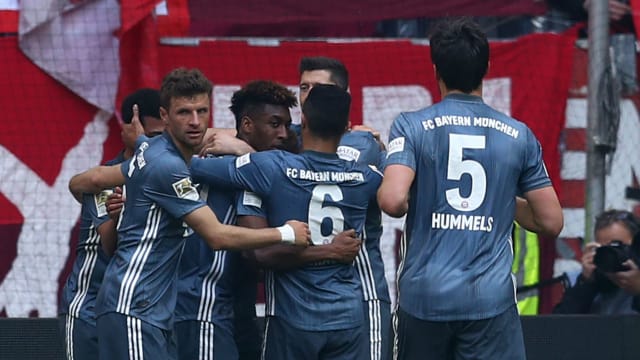 Bayern Munich reclaimed their position at the Bundesliga summit with a comfortable 4-1 win at Fortuna Dusseldorf on Sunday.

Borussia Dortmund had unseated Niko Kovac's men on Saturday after edging past Mainz, but the Bavarian giants restored their one-point advantage thanks to a double from Kingsley Coman and strikes from Serge Gnabry and Leon Goretzka.

Coman opened the scoring in the 15th minute with a low cross that deceived goalkeeper Michael Rensing and then added a second after 41 minutes by applying a cool finishing touch to a flowing move.

The impressive Gnabry added a third 10 minutes into the second half as Bayern – who lost Manuel Neuer to injury shortly after the interval – cruised to the most routine of victories despite Dodi Lukebakio's late penalty, after which Goretzka restored their three-goal margin.

points and top of the league

Bayern started in typically dominant fashion and clipped the post inside five minutes when a combination of Coman and Fortuna defender Matthias Zimmermann got on the end of Gnabry's low cross.

Coman was not to be denied after 15 minutes, though. The France international whipped in a low cross from the left, and despite Thomas Muller's best efforts to get a touch, the ball nestled into the bottom corner without any assistance.

Robert Lewandowski then sent a 25-yard free-kick agonisingly wide of Rensing's right-hand post before Coman scored his second four minutes before the interval, the 22-year-old steering into the top corner from eight yards after he had been picked out by Joshua Kimmich.

Bayern started where they left off at the beginning of the second period, Rensing superbly denying Thiago Alcantara from close range.

Moments after Neuer was withdrawn after pulling up making a pass, the visitors added a third when Gnabry stole in at the back post from a corner to prod home.

Lukebakio scored a consolation goal in the 89th minute after Mats Hummels had been penalised by a VAR review for handball but Goretzka had the final word, stroking home from close range as Kovac's side took another step towards a seventh consecutive Bundesliga title.

What does it mean? Bayern build on Dortmund thrashing

Bayern's 5-0 thumping of Dortmund last weekend would have counted for little if they had not backed it up with another three points at Fortuna. They were never in danger of slipping up, though, as Coman and company made light work of their hosts to reclaim pole position ahead of the season's final five games.

In the week that he was involved in a training ground bust-up with Lewandowski, Coman delivered a knockout blow to Fortuna with a scintillating first half-display. The former Juventus man has endured a injury-hit campaign but demonstrated exactly what he is capable of when in full flow.

TWO FOR THE KING

The Germany international has endured a difficult few years with injuries and he will be hoping that this latest setback does not rule him out for the closing weeks of the season.

Bayern host Werder Bremen in the Bundesliga on Saturday, while Fortuna travel to Mainz.