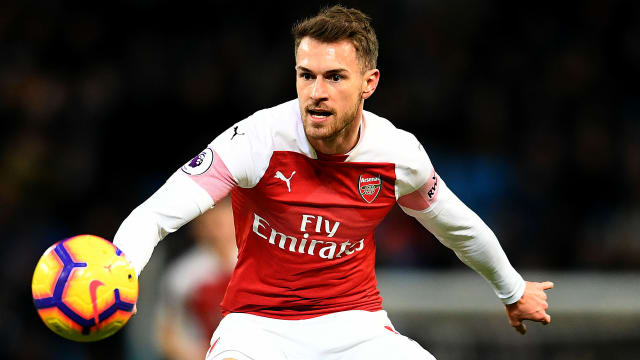 Arsenal head coach Unai Emery has challenged Aaron Ramsey to end his career with the club on a high.

The Gunners are in the thick of a four-way battle for two Champions League qualification spots in the Premier League and have one foot in the Europa League semi-finals after earning a 2-0 quarter-final first leg win over Napoli on Thursday.

Ramsey – who will leave the Emirates Stadium for Italian champions Juventus at the end of the season – scored the opener against Napoli and Emery wants him to continue his fine recent form in the closing weeks of the season.

"It's not easy for him after he signed for Juventus but his focus is to help us and his attitude is a very amazing attitude towards each training session," he told a media conference ahead of his side's visit to Watford on Monday.

How good was this guy tonight?

Sixth-place Arsenal will climb back into the top four if they overcome the Hornets and Chelsea fail to pick up any points against Liverpool on Sunday, and Emery knows his side will have to be at their best against the FA Cup finalists.

"We are showing we are competitive and have a good mentality," he added.

"At Watford, we need to be defensively hard and strong, like we are at home now, and in the attacking moments use the best opportunities to find chances to score."