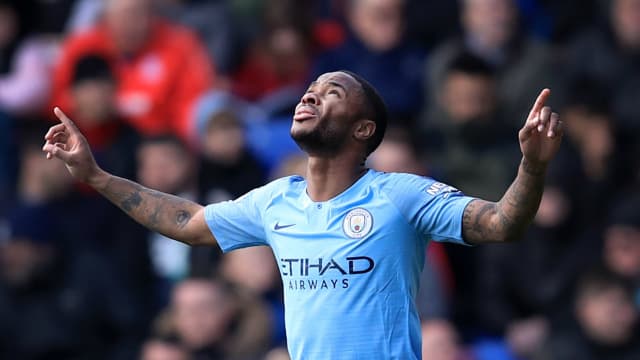 Raheem Sterling scored twice as Manchester City won 3-1 at Crystal Palace to move back above Liverpool to the top of the Premier League table.

With the Reds at home to Chelsea later on Sunday, City put pressure on their title rivals despite Fernandinho, who missed December's loss to the Eagles, being absent with an injury that may rule him out of next week's Champions League quarter-final second leg against Tottenham.

City led in the 15th minute when Sterling found the top corner and he seemingly made sure of all three points after the interval by converting Leroy Sane's driven cross, although Sergio Aguero going off with an apparent injury will have concerned Pep Guardiola.

And the City boss was further frustrated as his side lost their clean sheet to Luka Milivojevic's 81st-minute free-kick, although the defending champions were still able to close out another victory at Selhurst Park thanks to Gabriel Jesus' precise finish.

FULL-TIME | Not without a little scare, we get the job done! COME ON!!

Sterling wasted a golden opportunity to put City in front in the 10th minute, somehow missing from close range after being brilliantly set up by David Silva.

But the England forward was soon celebrating his 20th club goal of the season in all competitions, racing on to a perfect pass from the recalled Kevin De Bruyne to lift a fine finish into Vicente Guaita's top-left corner, with the goalkeeper's positioning questionable.

Guaita saved from De Bruyne after Ilkay Gundogan's chip into the Palace box caused chaos and Benjamin Mendy fired straight at the goalkeeper before the interval.

Palace were holding on admirably, but City unlocked the door again in the 63rd minute. Silva and Aguero combined on the left to free Sane and when he fired the ball across the box, Sterling turned it in at the back post despite a slightly scruffy contact.

Aguero's substitution, the striker going down the tunnel after being replaced by Jesus, could affect City's chances of clinching a historic quadruple and they had to endure a nervy few minutes after Palace captain Milivojevic exploited a huge hole in the wall to beat Ederson.

But Jesus ended any hopes of a Palace fightback at the death, De Bruyne leading a clinical counter-attack to set the Brazil striker up to beat Guaita at his near post, although the offside flag should have been raised.

What does it mean? Pressure back on Liverpool

Their game against Chelsea will spark memories of the 2014 title race for Liverpool and City ensured the Reds are under maximum pressure at Anfield.

City have won nine in a row in the Premier League, keeping clean sheets in six of the most recent eight of those games, and the champions look in no mood to give Jurgen Klopp's side an inch.

De Bruyne proves worth to Guardiola

It was a shock to see De Bruyne among the substitutes against Spurs in midweek, with Guardiola confirming the decision was tactical. But the Belgium playmaker, City's star man last season, showed he can still play a central role in the quadruple chase with a high-class display.

Not only did De Bruyne record his first assists of a Premier League season blighted by injury, he showed his undervalued physicality with important interventions in a scrappy midfield battle and his experience was crucial in closing out victory after Milivojevic's late goal.

336 - Kevin De Bruyne has assisted a Premier League goal for the first time since May 2018, when he set up Manchester City's final goal of the 2017-18 season against Southampton, 336 days ago. Architect. #CRYMCI pic.twitter.com/v9GrNdizzc

Palace rely heavily on Wilfried Zaha to make things happen in games where they see little of the ball, but he could not make any attacking impact of note.

And there were the usual signs of frustration from the attacker after he was - admittedly needlessly - tripped from behind by an unpunished De Bruyne just before half-time.

City's next two games are both at home to Tottenham, who visit on Wednesday for the second leg of the Champions League quarter-final and are back three days later in the Premier League. Palace are in action on Sunday, making the short trip across London to face Arsenal.