Pochettino unsure if Alli and Winks will face Manchester City 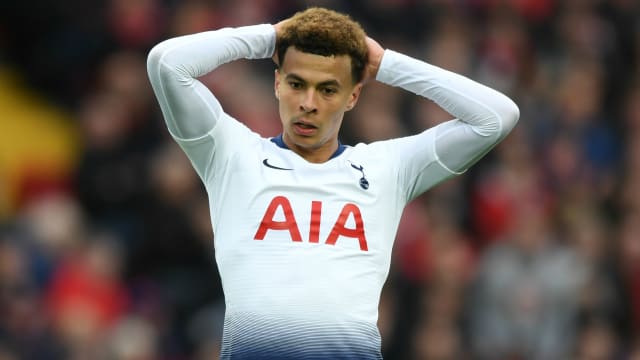 Both players missed Saturday's 4-0 Premier League win over Huddersfield Town, Alli after suffering a broken hand in the 1-0 victory over City in Tuesday's first leg and Winks after sustaining a groin injury in training.

Kane will definitely miss the game at the Etihad Stadium after injuring his ankle in the first leg and Pochettino says they will have to play a waiting game to see if Alli and Winks can line up against Pep Guardiola's side.

When asked if Alli will be fit, Pochettino told a media conference: "We'll see because we are not sure.

"He is doing some training sessions with protection. He needs to feel comfortable. It is a little bit painful because he broke his hand in two different places.

"It all depends on time. We will see if we arrive in a position where he is comfortable to play. We'll see, today is difficult to know."

Speaking about Winks, Pochettino added: "In the middle of training he started to feel something painful in his groin.

"He's a player we need to assess tomorrow, and then after tomorrow take a decision. We are optimistic, but you know there is doubt."

In the absence of Kane, Alli and Son Heung-min – who started on the substitutes' bench – Lucas Moura was tasked with delivering the goals against Huddersfield, and the Brazilian did not disappoint.

First hat-trick at our new home.

He added to Victor Wanyama's opener in the first half and then completed a hat-trick late on with two superb finishes.

Pochettino was delighted with the 26-year-old's display and wants every member of his squad to follow the former Paris Saint-Germain forward's lead and contribute in the closing weeks of the season.

"Lucas got a hat-trick and it was an unbelievable afternoon for him," he said. "I am happy for Lucas. It is going to help and bring him confidence.

"When you have 25 players they need to have the opportunity to play. We have a very tough period ahead; it is going to be tough. We need all the players fit."

Huddersfield boss Jan Siewert, meanwhile, was frustrated with his side's profligacy at 2-0 down.

Steve Mounie was particularly guilty of spurning a golden opportunity that could have set up a grandstand finish, the unmarked striker heading wide of Hugo Lloris' goal from just 10 yards.

"The most disappointing thing for me is that we had possibilities to score here, and we didn't," Siewert said.

"We could have been the first away team to score here and when the score was 2-0 we had three big possibilities to score.

"We didn't do that and then Spurs are so good at punishing you directly.

"They did it, and this is the thing that annoys me, because we did have possibilities to score."