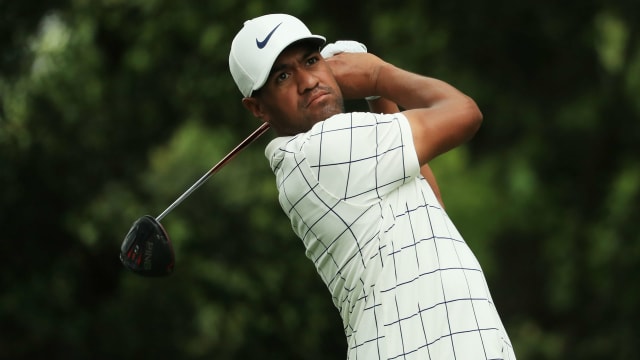 Tony Finau surged to the top of the leaderboard at the Masters by picking up six shots in his first eight holes in round three, as Tiger Woods started slowly.

For the first time in history, five players were tied for first place after 36 holes at Augusta, with Jason Day, Brooks Koepka, Francesco Molinari, Adam Scott and Louis Oosthuizen all sharing top spot at seven under.

However, that quintet were quickly overtaken by Finau on Saturday as the American, three under overnight, birdied his first three holes before picking up another shot at the sixth and eagling the eighth in sensational fashion.

Finau's second shot to the par five finished eight inches from the hole and he then had a chance to record the first front-nine 29 in Masters history at the next, only to miss a birdie putt from 10 feet.

A day of low scoring appeared highly likely, with Patrick Cantlay having already gone round in 64 - one shy of the course record - to reach six under.

At nine under, Finau was one clear of Scott, who birdied the first, Xander Schauffele and Webb Simpson. The latter was another man to have improved his score significantly, having played the first 14 holes in seven under.

Woods could not gain ground early on, though. After parring his first four holes, the 14-time major winner bogeyed the fifth to slip four off the pace.

There was still plenty of time for things to change significantly, with birdies and eagles being found all over the course.

Prior to Finau's eagle on the eighth, there had briefly been an eight-way tie for the lead, illustrating just how tight things were at the top.