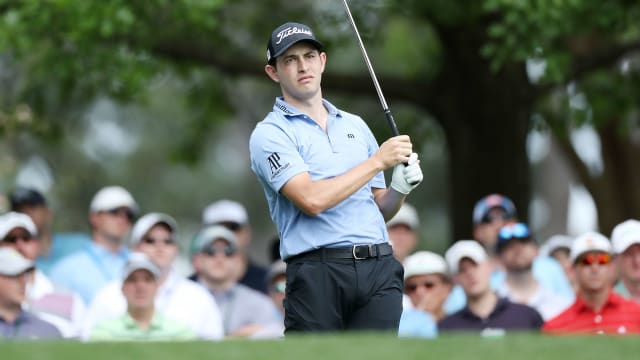 Patrick Cantlay showed what was possible on day three of the Masters, carding a superb 64 to move within one shot of the lead as the final groups began their penultimate rounds.

Cantlay picked up four shots on each nine and began the last hole needing one more birdie to equal the Augusta course record of 63.

The American could not manage that feat after finding a bunker off the tee, but a superb up-and-down saved his par and ensured he reached the clubhouse eight under for the day and six under for the tournament.

As Cantlay putted out on 18, the final groups were in the process of getting under way, with five players beginning the day at seven under - Jason Day, Francesco Molinari, Brooks Koepka, Adam Scott and Louis Oosthuizen.

Patrick Cantlay cards a to surge up the leaderboard. #LiveUnderParpic.twitter.com/A3mbYkc7g1

Tony Finau soon made it a six-way tie at the top of the leaderboard, courtesy of birdies on four of his first six holes.

Tiger Woods was among those only one shot back and the 14-time major winner was soon joined by Phil Mickelson, who birdied the second and third.

Rickie Fowler, Matt Kuchar and Justin Thomas had climbed to within two of the lead, along with Hideki Matsuyama. The latter was six under for the day with one hole to play.